Hell-vellyn. The Clue's In The Name.

Today is the first of our two races, known collectively as the ‘Dirty Double’. My little treat for my girl with mileage on her mind. She needs five hundred of them before May. First up it’s the 15km Helvellyn Trail race which starts and finishes at Jenkins Field in Glenridding.

We drive there via the scenic route over the road they call ‘The Struggle’ which runs up from the back of Ambleside to the Kirkstone Inn at the top of the pass. It’s an entertaining route. L refuses to drive us back.

They hand over the race t-shirt before we start and it’s a tasteful little black number. The Helvellyn Trail race doesn’t actually, thankfully, go up Helvellyn but the t-shirt is nicely ambiguous on this. So I can pretend it did. Although it’s still sure to be tough, Hell-vellyn the clue's in the name. 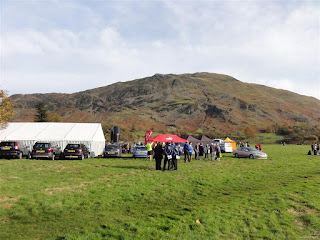 There are two races. L has chosen the less serious ‘Challenge’ race at 1pm, whilst I’m in the main ‘Trail’ race at 2pm. Both nicely late in the day starts. We hit a cafe for a bacon sarnie and a cuppa before we start. Continuing our involuntary quest to break every pre-race rule in the book. 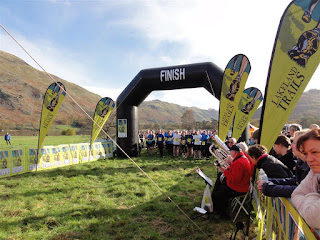 At quite a few races that I do, they like to worry you by introducing the opposition. Today is no exception as they announce current GB Marathon runner Susan Partridge and former Olympic marathoner Jon Brown, who won the race the last time it was held in 2008. The organisers don’t elaborate on why it’s not been held since. I wonder how many runners they lost three years? Too late to google it now. 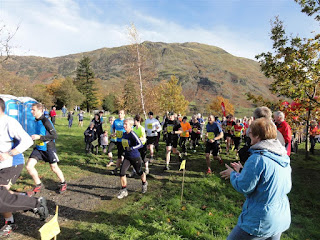 I start near the back because I know that most of the other runners will do the nasty rocky bits faster than me and will just want to push past. Then they throw in a few miles of Tarmac through Glenridding and up the first climb. Terrain I excel on and I overtake a lot of them. Then, as predicted, they thunder past me when it gets difficult. 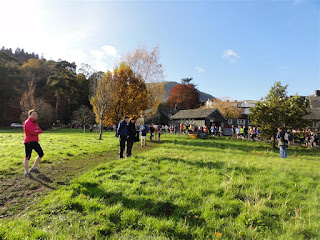 It beats me how parts of the course passed a Health and Safety inspection and let's face it, they're not good at making paths up here. They just throw a few boulders in a random pattern and be done with it. There you go, walk on that or in our case run on that. Treacherous.

I’m not complaining really, I was expecting this. It is a ‘Fell Race’ after all. ‘Fell’ as in you’ll probably fall a lot and people do. The course keeps the medics busy. I twist my old war wound of a dodgy ankle and hobble through three quarters of it.

The course runs down two valleys. First the Glenridding Valley and as we turn at the end it is with a nod to the peaks of Catstye Cam and above it the great Helvellyn him/herself. Then we pop into the Grisedale valley, with Helvellyn now on our right as we head out towards the likes of Dollywagon Pike.

Finally we’re off the rocky bridleways and the mud, on to much more substantial hard packed gravel tracks and finally another section of my beloved tarmac at the end.

As I head back in to Glenridding it is odd to see L there cheering me on but it’s very welcome. Although I’m a little gutted I didn't catch her, as I did at Cartmel last year on our last Lakeland Trails expedition. When she did assist by taking a wrong turn.

1:17:56 is an adequate time and 151th out of 366 is a more than adequate position for a non-fell runner who steps around all the rocks rather than plummeting over the top of them like the experts do.

I tuck into the Kendal Mint Cake at the finish and wait for the spot prize draw, which neither of us have any luck with.

Well done Lakeland Trails. I consider their motto ‘Inspiring Races in Beautiful Places’ as I look at a woman at the finish holding a bloody hanky to her forehead and asking someone to text a photo of her before the bleeding stops... Nutters these fell runners but yep, I’m inspired. Where’s the next ROAD race? Ah, that’s after I’ve negotiated tomorrow.

We sit in the Old Dungeon Ghyll in our stylist black Hell-vellyn t-shirts, dodging the Guy Fawkes Night displays for Doggos sake. L looks wiped out although it doesn't quell her appetite for the pre-race chilli again. Less beer all round though and an earlier night, despite a few late interruptions for fireworks and noisy neighbours.