Shipped Out, Dropped Off And Told To Run Back

Part two of the ‘Dirty Double’. Sadly it doesn’t say that on the race t-shirt of which we get another one today. Bright orange. Today it’s the Ullswater 13.6km trail race which requires an earlier start, which for L is 9.30am. This means we’re up at around 7am, finding that the weather has suddenly dropped cold and is below zero in places. We head back over ‘The Struggle’, hoping it's not icy. It’s still quite sunny though. 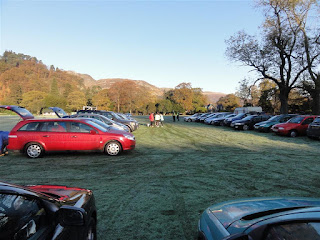 The race also requires full body cover. Every competitor must carry a hat, gloves, a cagoule and overtrousers of some sort. This is partly for the boat journey... where it may be cold on board. L needs to be at Glenridding Pier to catch the first of three trips by the Ullswater steamer ‘Lady Of The Lake’ which will take us to the start at nearby Howtown. It’s a case of being shipped out, dropped off and told to run back. I’m on the third sailing at 11.30am. So after a one hour head start yesterday she gets two hours today. 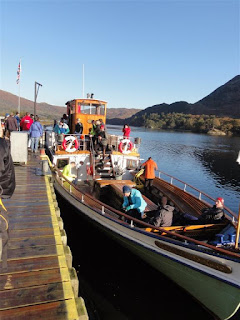 The boys and I was goodbye to her before heading off for a sausage cob and a cuppa. Well we do have two hours to kill. Well two and a half actually because it quickly becomes apparent that the other boats are going to be running late.

We finally board at noon and the finishers from the first trip are already coming in. I keep a lookout for L but don’t see her. As we sail (or should that be steam), we go close enough to the bank to cheer the earlier starters along. Which is a nice touch but one which will be unavailable to us on the last boat. We also go close enough to see them all clambering up a big hill. Oh dear. That'll be us next. 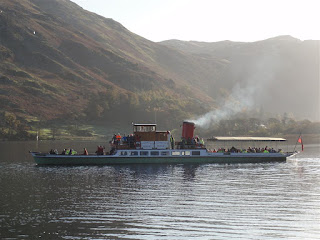 The boat trip actually reminds me of the one to Alcatraz, only I think, I hope, we don't have to swim for it to make our escape. During the half hour journey we are serenaded by a singer/guitarist who among other songs sings us ‘Sailing’ with especially adapted words for this journey. Then both the guitarist and the race organiser announce that they are so inspired by their own race that they’re going to join us. 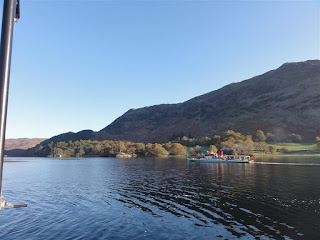 We arrive at Howtown, which turns out to be no town at all. Just a landing stage and a start line. Well, a tree masquerading as a start line.

GB Marathon runner Susan Partridge is already there waiting, having eschewed the boat and ran there instead. Our guitarist dons shorts and promptly overtakes me. As does the organiser, who having acted as official starter then joins in and overtakes practically everybody.

The course is hillier and rockier than yesterday, which means I walk a lot again but it’s still kind of enjoyable. We run around the lake with almost always one eye on the finish, the only problem being it's across the other side of the water. So no shortcuts then. In fact you can hear all the cheering at the finish from around 5k out.

It’s a bit disheartening too that when we near the end they send us uphill again just before the last decent. Which takes us past a cafe but it’s a bit late to stop for coffee and cake now. Just 2k to go as we head into Patterdale.

L is waiting at the line with the boys. Where I'm surprised to find I'm not last. 01:22:56, slower than yesterday but not bad for an anti-fell runner.

Then it’s back to Langdale to take the tent down in the gathering gloom before joining the queue for the M6 south. I reckon I'm going to need a take away curry to get me over all this.