How Not To Maximise Your Income

As I take my suit back I have to step over a beggar, in a rather nice puffer jacket (the sort that I think L wants for Christmas) and sipping a costa coffee, who asks if I have any spare change. Somehow I don’t think he’s got the right idea on how to maximise his income but then he’s probably just on his lunch break. He got a ‘no’ by the way.

I’m impressed with the service tonight at the not-so-intimate-anymore-since-its-refit Rescue Rooms as the staff move a chap in a wheelchair right to the front and barrier him in. For his own safety I imagine, in case it gets lively. I’ve also got a good spot but again we have an annoyingly back lit stage which makes photography difficult but I’ll have a good stab.

Moments later two ‘Movember’ supporting chaps, of course that could be their permanent look, and two others who look like they haven’t started shaving yet take the stage. This is ‘Fanclub’, without the 'teenage'. 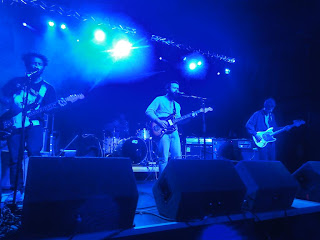 They embark on a noisy and promising start but when the vocals start they don't quite back up the promising guitar work. Most of their stuff then descends into the standard indie fare and they actually seem most inspired on their slower numbers and when the second guitarist joins in with the vocals.

They’re a quiet lot, who don't attempt to get any banter going with the crowd and that’s to the detriment of the atmosphere. After a little under 25 minutes they’re done and we await the headliners.

At 8.45 something Japanese, according to Shazam, heralds the arrival of Yuck. Who are straight out of the blocks, no messing, and into the rather wonderful ‘Holing out’. 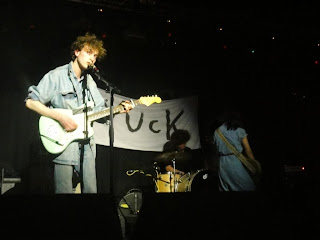 Yuck are three-fifths British and were formed by two ex-members of the defunct Cajun Dance Party, who I had a bit of a soft spot for. Those two, Daniel Blumberg and Max Bloom, flank Mariko Doi who, oddly for a bass player, gets centre stage. She hails from Hiroshima and also probably gets to choose the intro music. 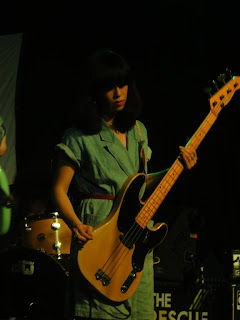 Then there’s Jonny Rogoff from New Jersey, a man with big big hair who powers most of the songs along adeptly from behind his drum kit.

There are just four of them tonight. Daniel's younger sister Ilana has presumably been left at home to do her homework. Sadly this means the delightful ‘Georgia’ lacks Ilana’s vocals tonight and it suffers for it. 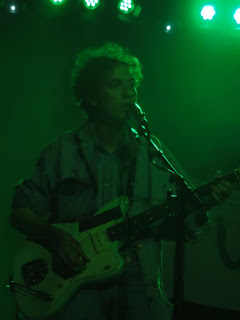 Daniel Blumberg reckons they stayed every night in Nottingham on their last tour to save money. Returning even from Glasgow... really? That saved money? Is that the tour when they didn’t even play Nottingham because they cancelled to appear on Later With Jools? Or was that the tour when they played to ten people at Stealth? Well according to Max Bloom it was ten, the reviews tend to suggest around thirty but perhaps they were counting staff, road crew and the support band.

Those two chat a bit while Doi barely speaks and instead concentrates on some great Kim Deal-esk thudding baselines to add to the boys fuzzing guitars. We’re sort of back in the early 90s territory here. Rogoff speaks only to enlighten us to the fact that this is the first time in three shows that they haven’t blow up the PA. Yet.

In fact everything hangs together sublimely, from the acoustic delight of 'Suicide Policemen' to the distortion drenched sound of 'Get Away' in a set drawn from their so far only album and a few inspired extras. Those include the sort of a double A side ‘Milkshake’ and a new track ‘Soothe Me’, both of which appear on a new deluxe edition of the album, along with b-sides and such, that is just out. 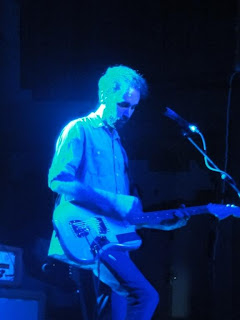 The vocals briefly swap to Max Bloom for the tremendous ‘Operation’ before they sort of amble rather than sprint to the line with the slower numbers ‘Stutter’ and the closing 'Rubber', the latter being bathed in a sea of feedback before they leave us.