I wake up in what feels like a muddy field but is actually our tent. It’s hard to tell the difference when you’ve shared your sleeping quarters with two incredibly muddy dogs. Well at least they seem to have dried off nicely overnight, depositing their grit as they did so. 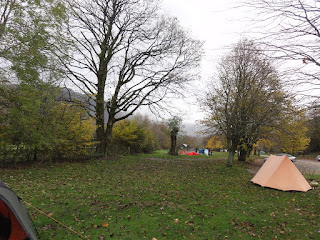 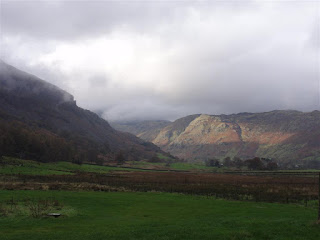 I choose a meandering route from where we are at Great Langdale to arrive us at the Skelwith Bridge coffee shop in time for late afternoon tea and cake. The first few miles is more problematic than we would have thought. Firstly the stiles have no ‘dog gates’, which means lifting the already muddy (again) dogs over them and getting incredibly muddy ourselves. Then the local cows at Baysbrown Farm organise a road block and cause us to divert through something that is probably best described as swamp land. So we're well muddy before we even get properly started. 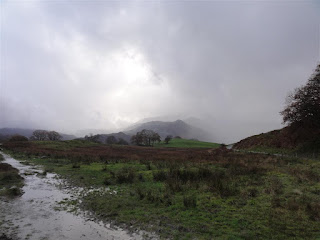 Thereafter it goes quite well. Although we never make it to the Skelwith Bridge coffee shop because we stumble across the Muddy Boots Barn about a mile before we got to Skelwith Bridge. 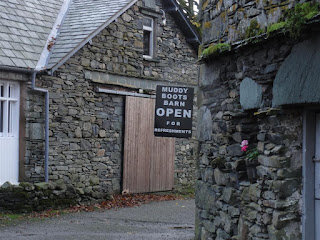 It's at the Elterwater Park Guest House on the Cumbria Way just past Colwith, they’ve done their barn out into a rather fetching cafe since we last ambled this way. So Tea/Coffee, some nice sticky pudding thing and biscuits for the boys. Enough to power us all the way back to Great Langdale.

Doggo is then gutted that we don't stop at Skelwith Bridge or at the Britannia Inn in Elterwater or the Wainwrights Inn and instead we walk all the way to the Sticklebarn back in Great Langdale. It is closer to home. They also have the beloved Snecklifter on and chilli. Great pre-race food...

Ten miles today and surprisingly, for a ‘flat’ day, 540m of ascent (and descent) despite not really going up anything. Just don’t tell L’s knees.

Doggo has coped very well with all this walking. His old legs are bearing up well, as incidentally are mine. It’s a good job because it gets more serious tomorrow.