A bit of travelling today. Up the M6 and then back down again. First we head up and pitch camp at Langdale before heading back down a junction to the Capernwray Dive Centre near Carnforth for tonight’s ‘Dip in the Dark’. The Dive Centre is in somewhere called Jackdaw Quarry that they’ve flooded and turned in to basically a diver’s amusement park. There are sunken ships to explore, as well as submerged helicopters, garden gnomes... Shergar... and Lord Lucan... So that’s where they ended up... or rather fibreglass versions nabbed from Blackpool Pleasure Beach. I can't imagine how freaky it would be coming nose to nose with Shergar in the dark or for that matter, even in the light. 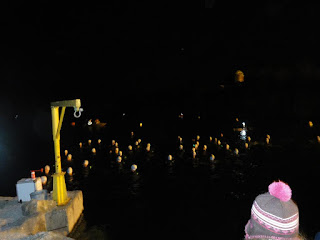 At least as it's a circular pond and they’ve also illuminated the buoys that mark the edge of the course, she can't possibly get lost. I hope. Each swimmer has helpfully attached a glow stick to the back of their wetsuits, so that the organisers can find the bodies later. 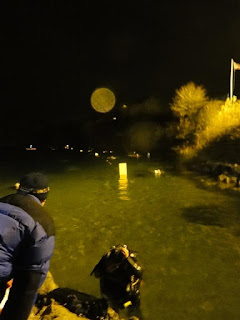 It's all over in around 15 minutes for L or just under 7 if you're the smart arse who won. L gets out of the water predictably no longer terrified and simply elated. She'll be smug as hell tonight. 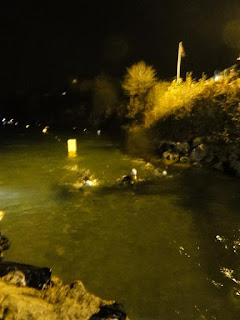 Then we leg it before the fireworks start, mainly for Doggo’s sake but there doesn’t look like they’ll be much happening anyway. We make it back to camp and then head for a busier than expected Old Dungeon Ghyll Inn but its still quiet enough to be pleasant. Then it’s down to the real business of the evening, the Old Peculiar and some hearty pub grub.