On the bike and yet another puncture. I even fell down the very same hole again. (Sigh). It is such a dreadful stretch of road, hole after hole. I think at least half of the punctures I’ve had over the years have been on this same half a mile of road.

I think the chap whose front fence I lean my bike against while I repair it is a getting a bit sick of me. Then again, he said ‘good morning’ to me today, so perhaps not. We’ll be exchanging Christmas cards soon.

Then as I pedal into work I pass a pack of leopards, tigers, cheetahs and other assorted cats, I’m sure there was a tabby in a short skirt among them but I may have been mistaken, all heading to the Roundhouse sixth form college. So it must be Children in Need night again.

The very cosmopolitan L takes her second train journey in two days and meets Daughter for lunch in Sheffield. In Bungalows and Bears, no less. Which looks (via their website) as interesting as it sounds. I wonder if Pudsey will be popping in there later? 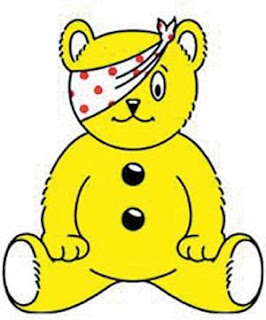 I take it easy on the ride home. I have to. I have no more inner tubes.

Then a little wander to the Victoria in Beeston tonight.