L talks to somebody at the pool who’s managed to find enough pool time to train for a 10k swim. I think she’s sort of jealous and perhaps inspired... We’ll see. The woman’s next event, near Dartmouth, is apparently 'with' the tide, so it only feels like 6K. If you can believe that. The pictures look nice, as nice as the fear of drowning can look.

L says it’s a goer when we get a pool in the garden. Which could be stumbling block. Next door used to have a really huge pond, perhaps we could knock through. I think it’s still there, somewhere, under the weeds.

L does need a new target. Even more so now that Waterstones have turned her job application down. I’d boycott them I was her, the b*****ds, but I don’t suppose she will. She says she’ll keep trying, she’s targeted them and she says she always reach her targets. Hmmm, usually because I keep her to them. Although perhaps this is one that I won’t need to use the thumbscrews on.

As regards my own dog training, MD is crap after his summer lay off but not as crap as I expected. So I guess that's good news.

Ok scrub what I said on Monday, as Contador cracks Rodriguez in a terrific 17th stage of the Vuelta. Can there possibly be any more twists in this race? Preferably not involving Spanish Beef. 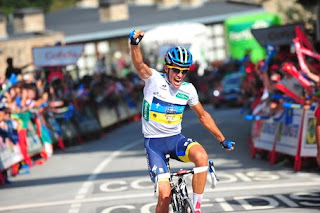