It really has been a great summer of cycling. The Tour de France followed by the Olympics and then as well as the Paracycling there was la Vuelta A España which was also covered by ITV4. This seamlessly links into their coverage of the Tour Of Britain which started yesterday in Ipswich.

Today stage 2 starts outside Nottingham Castle. I haven’t kept enough holiday back to attend but L is there at the start, as it's not far from where she works. 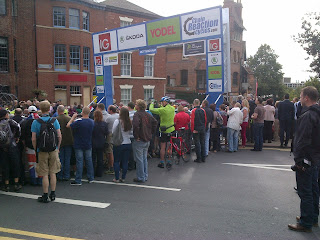 Instead I follow it on Radio Nottingham, where it sounds well lively. I sort of wish I’d gone down.

The start is just a ceremonial roll out, which then takes them on a pleasant amble through Wollaton Park before the real, rolling start takes place on the road to Trowell.

Tonight I take the boys on the park for a ball session and to top up Doggo’s limp. Sadly Monday’s dog training is now no more. Although we are trying to setup a replacement at a different venue.