So we’re in Malvern at the Malvern Autumn show of which the dog agility is but a small part, amongst the other showy things - local food and drink, cattle and sheep, goats, overpriced burgers and men selling fat free frying pans. You get the gist.

The dog agility is positioned between the rabbits and the chickens, which isn’t ideal but is probably better than being next to the sheep. They don’t seem to have been able to source the usual agility jumps and we are asked to jump what looks like equestrian hurdles but a jump is a jump I guess. MD certainly doesn’t seem to care and does two clear but slightly slow rounds before messing up his third run. Unfortunately there’s nothing for Doggo to compete in here and he has to make do with a supporting/coaching role.

Lunchtime is spent walking around the rest of the show and taking a liking to the insanity that is Horse Boarding. 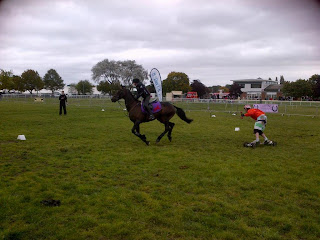 Strangely all the teams consist of mixed sex pairs, with the women always astride the horse and the man usually on his backside being dragged behind it with the board still attached to his feet. L agrees it looks fun (that may not have been the exact word she used) and says she’ll look at horse riding lessons... why not boarding lessons?

In the afternoon they move the dogs to another more prominent ring where there's more of a crowd. This is the reason we’re here, the Alpha Agility final which MD qualified for way back in April. There are 49 dogs in the final and we are drawn 45th to run, so quite a wait.

We arrive to check in at the ring just as the duck display is finishing and the Racing Llamas are taking their place. 49 pairs of canine eyes watch their every move.

Our performance in the final isn’t bad but we bombed out when MD came out of his weaves as I changed sides behind him as he went in. I knew it was a risk to attempt this move but it was a final, so it was worth a go. All or nothing.

Still we got a rosette, two bags of dog food and a new bowl for reaching the final. So it was worth the trip.

It was also pleasantly surprisingly to get in the car and find that Derby had beaten Forest again. This time they had a man sent off, which I suppose makes up for the same thing happening to us last year. The difference is we won with ten men and they didn’t. Ha ha.