Day three of the new fitness campaign and it’s time to stop being a wimp because it’s a bit windy and get the bike out. Subsequently I spend the morning at work considering crawling under my desk for a nap.

We are now three episodes in to the Bridge, at this rate we might even catch up with and jump on to the new Bridge II, which has just started on BBC4.

I think we are meant to favour the nice but rumbled Danish detective with the dodgy vasectomy rather than the blonde Swedish ice maiden in leather trousers who changes her shirts in front of her colleagues at the office and pops out for sex just like you would for a take away. Hey, what's not to like? 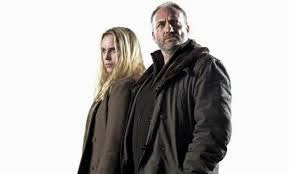 So far it reminds me slightly of ‘Hunted’ which of course was panned for being too complicated, too far fetched and too difficult to follow but of course it was British. Had the Danes or Swedes made it the critics would probably have been in raptures.