I'm feeling smug this morning as I get out of bed early and go for an early morning swim in the 50m pool at Harvey Hadden. Sadly silly o’clock in the morning is practically the only time you can swim the full length.

L asks whether I now feel totally refreshed, set up for the day and hooked? Err, no. Knackered but not set up. It was very good though. Nova Centurion had five lanes, us plebs had three. It was actually really busy but most people were in the slower two lanes, there was never more than two of us in the fast lane.

I did 20 lengths e.g. 1km and still made it to work on time. I could actually have left home ten minutes later and/or skipped having a shower at home, which L points out correctly wastes time that could be spent still in bed but then you can’t really have a proper showers at HH. Well, I’m assuming you’re not allowed to get naked in the unisex changing. Although there are no signs saying this so perhaps I’m wrong.

Talking of inappropriately attired... L gets fined a tenner for not coming to work in PJs aka bedroom wear. L’s boss correctly points out that if everyone came to work in whatever they wore in bed then half the country would be walking around naked at the office this morning. An interesting thought. 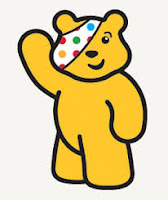 If you haven’t already guessed, today is Children in Need. Which possibly explains why I passed a girl dressed as a tiger this morning and I thought she was just out on the pull.

No cycling tonight as the velodrome is shut for a charity bike ride. Children in Need...