This morning L is marshalling at the Forest Rec Parkrun rather than running. I indulge in the usual ball chucking before adjourning to the café with the dogs for a well-earned bacon sandwich. In fact they serve me a full breakfast sandwich by mistake which I share with the boys.

L isn’t parkrunning because she’s participating in the Dirty Dash 10k at Holme Pierrepoint instead. Normally it’s a total mud bath but oddly it doesn’t seem too bad today. Must be the 40mph winds that have dried everything out. As it’s a noon start I drop L off before heading home with the boys and then to Derby’s match.

After the match, which Derby win 2-0 over Cardiff, I head straight back to Nottingham and meet L at Broadway.


‘The Lady in the Van’ didn’t make a lot of sense to me but then you perhaps need to be an Alan Bennett aficionado to appreciate it. This film comes with not one but two Alan Bennetts (Alex Jennings), well actually three if you count the real one who turns up at the end.


This is apparently the real story of Mary Shepherd aka Margaret Fairchild (Maggie Smith), a woman who wiped out a motorcyclist and then went on the run from the police even though the police weren’t looking for her because it wasn’t her fault. 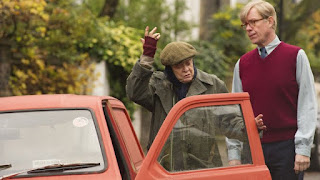 Bennett doesn’t know this when she turns up in a battered old van and parks in his well-to-do street in Camden. Spotting Bennett as a soft touch she worms her way on to his driveway, where she then lives in her van (or vans and always repainted yellow) for fifteen years until her death.

It wasn’t until after her death that they finally found out who she was but the film shows us, sort of, as we go along. Like how she was a gifted pianist who then tried to become a nun. How her brother put her in an institution from which she escaped. 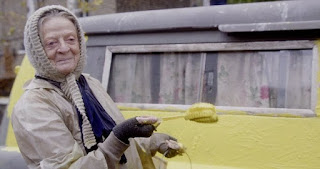 None of which fully explains why she acted as she did in the first place and what happened to the life she left behind. She is, it is implied, simply eccentric.

If that isn’t eccentric enough, then there’s Bennett himself or indeed the two Bennetts, Alan the writer and Alan the homeowner. Bennett the writer wrote a book about the whole thing, turned it into a play and now this film. Both of which starred Maggie Smith, who better to play a batty old woman. 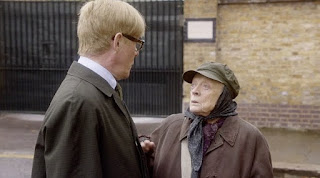 So it’s all a bit too eccentric for me and that’s before we get to the graveyard scene at the end.