A Couple Of Crocks

Practically everyone has banned L from running the Nottingham 10k today including her physio and her surgeon boss but she’s here on the start line with me, who no one has banned running but they should have done as I have a very slim chance of getting round in one piece. L claims it won't look much like a run, so she’s not going against anyone’s advice.

We have walked down and have clocked two beat boxes on the way but, as is becoming the way now, only one registers, scoring us zero.

A rare feature for Nottingham is that this race had a city centre start from the Old Market Square and hopefully it will stay that way in future years as it made for a great atmosphere.

In 2007 the much loved fountains in the square were flattened so that the space could be used for (money spinning) ‘events’ but it has taken nearly ten years for a major running race to be held here. Although I'm sure the real reason the square was changed was because they got fed up with students tipping washing up liquid in to the fountains which caused soap bubbles to go everywhere. Oh what fun we had.

So for once the square hasn’t got a giant Ferris wheel, a skating ring or the dreaded beach on it, it has us.

Then we’re off and heading to the Park which means some nice hilly bits and yes, it's quite a cheeky little course making the most of the undulations of Nottingham. I start quite well, at a fairly good pace and pain free, although so well strapped up that if I stop they may slap me in a pyramid.

From the Park it’s round the back of the Railway Station and then onto the Embankment. The water station is at 5k on the Embankment and I almost get there. The calf goes pop at about 4.8k with about 22 minutes on the clock, so I was happy with that. Oh well, race over and I decide the walk the rest of the way. Sadly this gives me far too good a view of the runner receiving CPR from fellow runners with just 500m to go.

By the time I have collected by bag from the luggage van I have already received a text message congratulating me on my time of almost 1:08. Hmmm, isn’t it about time that automated results systems allowed you to give them your target time, so rather than congratulations I would have ‘Commiserations on your appalling time of almost 1:08 ps how's the calf?’ instead. Entirely optional of course.

L comes in barely two minutes behind, also hobbling but looking far less injured that me.

The race t-shirt isn’t bad but doubt I’ll wear it much, it has far more illustrious race wear ahead of it. We get the bus home.

Later we head back into town to catch a nice romantic film called ‘Green Room’ after adding another dark beer, Grafton’s Black Abbots, to my trail in the Lord Roberts. Broadway also has dark one on in Nottingham’s Foundry Mild.

Green Room is the tale of an amateur punk band called the 'Ain’t Rights' on tour in Oregon without enough money for fuel to get back home. A problem they generally solve by syphoning it from the tanks of other vehicles. After one gig is cancelled, a journalist gets them a show at what turns out to be a neo-Nazi skinhead club in the middle of nowhere. 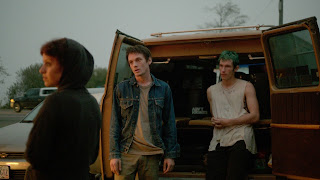 They make the best of it and show their bravado by opening with a cover of the Dead Kennedy's 'Nazi Punks Fuck Off' which does a pretty good job of winding up the locals. Despite that, the show goes well enough and they're just about to get the hell out of there when their bassist Pat (Anton Yelchin) accidentally stumbles upon the body of a girl has just been murdered in the club's green room. 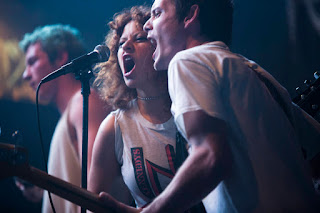 This results in Pat and his bandmates Sam (Alia Shawkat), Tiger (Callum Turner) and Reece (Joe Coe) being locked inside them green room by the management, in the form of Darcy (Patrick Stewart), the rather aloof owner, and his lead henchman Gabe (Macon Blair). They are affectively held hostage in the green room along with a girl called Amber (Imogen Poots) who was a friend of the deceased. 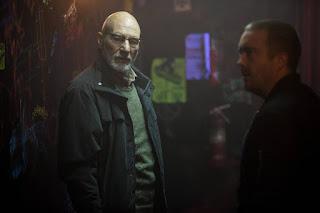 Darcy’s solution to the problem is to leave no witnesses to the murder and to frame the band for everything. So from being locked in, the band now barricaded themselves in but it soon becomes clear that that is not a good long term plan and escaping, preferably alive, is the only way out. What follows is a deadly cat and mouse game between the band members and the skinheads who now have the club has now been surrounded, one which rapidly spirals out of control. 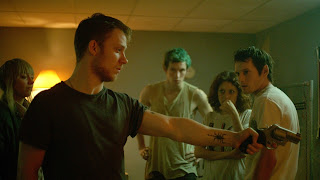 The film does then become an almost relentless bloodbath but quite a cultured one as it does at least manage to get us quite well acquainted with the main characters, which means you feel for them more, before they are slaughtered. It also makes a good job of conveying the claustrophobic sense of hopeless inescapability that they face. 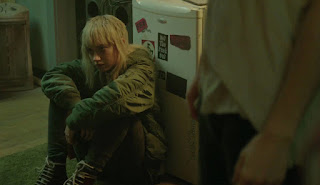 In a cast that is mainly young and largely absent of big names, you can’t really second guess who will survive, which adds a rare touch of suspense. Overall, quite a tense experience.

We finish the evening on the Borlase and two more dark ones, Lincoln Green Tuck and Acorn Gorlovka.