One Man And His Two Dogs


After doing in the inaugural Nottingham Run 5:30 last year (also the inaugural UK one), this year L proposes the inaugural Derby Run 5:30. So the alarm goes off at 4:00am which is even a bit early for Doggo.

The event starts outside the Guildhall, a rare public building in Derby that hasn’t yet been closed by the council. Parking is easy as street parking isn’t chargeable until 8:00am. Perhaps there are some advantages of the early start time after all. 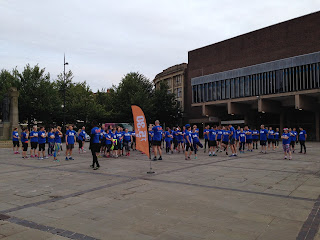 Later when I get to work it does in fact feel like I’ve been up hours but imagine how the dogs feel. They'll be in their beds or in ours, depending on whether they’ve jimmied the gate open or not.

The phenomenon of Pokémon Go hits Pride Park, in that we have zombies walking down our road staring into their mobile phones and disrupting the traffic. Apparently one of Pikachu’s mates is holed out behind the recycling bins at number 36. Who’d have thought?

L instructs that if she arrives home this evening without having been to the gym I am to either lock her out or deprive her of her Friday night. How I do that without depriving myself of my own Friday night is not clear and they think Brexit is difficult to achieve.