I head over to Catton this morning after a relaxed start to the day and arrive there around 11am. I pitch the tent and as others start to arrive we get busy setting everything up for the show which starts tomorrow. The new banner is hung proudly on the front of the marquee.

L is at work today and heads over later by train. The train drops her in Burton where she promptly heads straight for the Devonshire Arms. Eventually I head over to join her and to sample the Damson Porter.

She has spotted a new micro bar just down the road which is called the Last Heretic so we head there next where I sample another dark one, the wonderfully named Fuzzy Duck’s Mucky Duck which is a stout and number 69 on my trail. 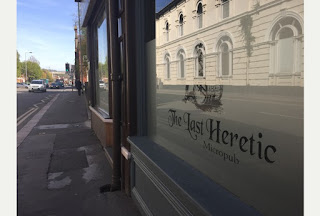 It’s probably not quite as good as the red IPA that L tries so it is that which we take back in our take-out tub to the tent along with a takeaway curry which we munch sat outside the marquee in front of the smart new banner.