The Coldest Place On Earth

I don’t recall much enjoying last year’s Sleaford Half Marathon but there’s little else on this weekend and I needed something to remind me of what a half marathon felt like. L assured me there was no way she’d be joining me in running it, which was fine. Not even when they sent out an email reassuring everybody that they’d replaced the two mile cross country section with ‘just one mile of good quality farm track'. Remember those words. Anyhow L was unmoved; she even said she liked the off road bit. So her response remained the same. No. No way.

So here I am, on the start line, back at the site of my first ever half marathon, in Sleaford, the coldest most desolate place on earth. It can’t be a coincidence that for two years running they supply the iciest, coldest wind you’ll ever find on the most open sports field you’ll ever be asked to run across.

Obviously here with me is L, on the start line, with a number pinned to her chest. Suddenly whilst we were in Scotland she changed her mind. Can’t face being outdone I reckon.

We start and despite starting nowhere near the front the pace is horrifyingly quick. First mile, 6.45. Too quick. It’s everyone else’s fault because they all sprinted away from me. I was worried about getting left behind and ending up last. Second mile, 7.10. Still too quick. By mile three, I’m over 7.30 pace and I don’t see it again, save for an incorrectly placed mile marker. Mile ten was well short.

I was also surprised at how much off road there was, I don’t recall there being this much last year and this year there’s supposed to be less. We don’t see any tarmac until after four miles. The ‘good quality farm track’ is as muddy and as treacherous as last year’s not good quality one. Improved route? No.

Apparently it takes us past the famous Temple Bruer... not that I knew what that was but it was in the farm yard we passed through. At the time I was distracted by a van full of barking dogs and didn’t see it. Though it should have been quite obvious as it looked like this... 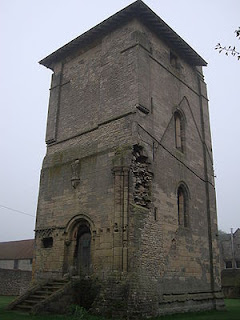 It’s a horrid run. I can’t get back anywhere near 7.30 pace, the timing chip chews up my ankle and I have blisters on the soles of both feet. I even turn the jelly babies down, I nearly choked on one last year and the way things were going today, it would probably have finished me off. Death by jelly baby, what a way to go.

There’s no massage this year but there is very welcome hot tea. It’s so cold I eschew the supplied bottled water; they’d probably be ice floating in it anyway and go for the hot tea. The goody bag is fairly good and the t-shirt again decent. It’s the same as last year only white not black.

Looking back now, I was actually ahead of last year pace until 10 miles. So perhaps I was being too ambitious or perhaps I should simply have done some training or at least more than I did.

So I’ve reminded myself of how a half marathon feels and it’s not pleasant. Twice is as often as I’ll usually do an event and I think it’s time to move on here.

In the evening, more cinema. Thankfully there are still some quality films around to save me from the likes of Gnomeo... Paul... and Yogi... Yep, they’ve made a film about Yogi Bear. Yogi, Paul and Gnomeo... if that was the name of a band, they’d win a BRIT award for sure.

Quality films such as ‘True Grit’ remade by the Coen Brothers, which becomes the second remake I've seen this year and it’s only February. I hate remakes almost as much as I hate sequels. The Coens have attempted to justify their new film by saying they wanted to 'go back to the source material' of Charlie Portis' novel and do a more faithful adaptation rather than a remake of the 1969 film starring John Wayne. Which I think was a pretty good film first time around... wasn't it? It’s just a hazy memory and I haven’t read the book either, unlike L who took it to Scotland on holiday with us.

The Great Lebowski himself, Jeff Bridges, plays Rooster Cogburn and Matt Damon is Texas Ranger ‘La Beef’ or LaBoeuf even. The undoubted star though is young Hailee Steinfeld, who is outstanding as a headstrong teenager, 14-year-old Mattie Ross. A stubborn girl who will stop at nothing to revenge her father's death. Not difficult casting though, just get a stubborn teenager to play a stubborn teenager, there's plenty around. 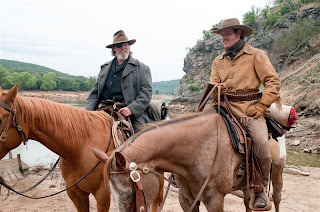 As she continually proves throughout the film she is well capable of taking care of herself, except perhaps when guns are involved. In her pursuit of the man who murdered her father, Tom Chaney (Josh Brolin), she seeks out Cogburn. Cogburn is a Federal Marshall with a reputation for not bringing in his prisoners alive, which endears him to Mattie. Unfortunately he is as equally effective at getting drunk as he is at killing.

I have a problem with one aspect of Rooster. At times you need subtitles to understand what he’s saying because his rambling is totally incoherent at times. The Coen's are big on accents, so I've no doubt they got the accent they wanted but when you add in that he’s a drunk as well... subtitles please. That's not something I usually say. I’m not into subtitles, despite the fact our new TV at home seems to automatically default to subtitles being on or so it would appear, at least after Daughter’s been using it. The young are so hard of hearing these days. 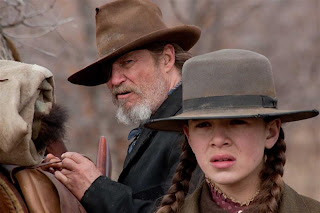 Beefy too is looking for Chaney but for another crime he committed, so he and Cogburn team up and set off in pursuit but refuse to take a ‘girl’ into Indian territory. Mattie is having none of that and she chases them down. They reluctantly accept her and set off across terrain where it always seems to be snowing, just like Sheffield. 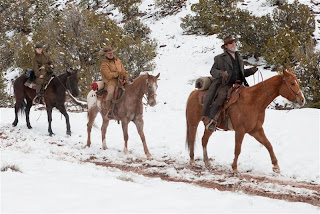 Cogburn’s general behaviour and particularly his drinking soon cause Mattie to lose faith in him. She is right to be disillusioned as the trail to finding Chaney goes cold and only by chance do they eventually find him.

The film is actually a bit simple for the Coens. You keep looking for the hidden meanings but there aren't any. It’s just a straightforward, decent film and it’s much funnier than I expected. Rooster even turns out to be a bit of a hero in the end.

Good film but... I'm still not sure why they made it.