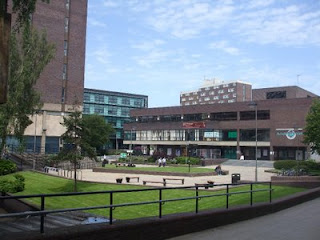 Nice uni, nice accommodation. The course to me sounds good too, not that I know anything about it, but the woman who gives the talk on it tries to make it sound as boring as possible. At four applications for each place they’re perhaps trying to put a few off. We leave just after 2pm and need to be in Huddersfield for 5pm. Do-able but an half an hour traffic jam in Newcastle doesn’t help and then an hour+ hold-up on the M62 extinguishes all hope. We arrive a mere 90 minutes late. Not a problem... we tag on to the end of a passing tour which is a smooth move but then we end up in the wrong talk, although it’s mostly relevant it’s still the wrong one.

Again the person taking the talk has the wrong idea, it’s like being in a lesson and she tries to sell the subject to us. Shouldn't she be selling the Uni to us? Everyone has already selected their subject.

It's a long, hard day with lots of motorway miles but still very interesting.