Land Of The Farmers

Today is part one of our UK tour visiting Daughter’s prospective universities. Well, UK is perhaps a bit over the top, it’s mainly Yorkshire or as Daughter now, not quite accurately, puts it ‘the land of the farmers’. Apparently I didn’t tell her three out of the five were in Yorkshire and of course they don’t do Geography at school these days.

First up, Sheffield Hallam, where it’s snowing. Which is nice but doesn’t help disperse the image of us being in the back of beyond. The university seems ok, although it’s not the main city campus but the course appears interesting. Well it does to me but I’m not the one studying. The accommodation is wonderful, certainly not back of beyond stuff and not a tractor in sight. Just the Leadmill (next door!), the Academy, the Plug, dozens of bars, the city centre... L and I are sorely tempted to take one of those cosy rooms and send Daughter elsewhere.

We stay in tonight, another bloody race tomorrow and I watch day two of the cycling. The highlight obviously is Chris Hoy’s convincing victory in the Keirin but the 'entertainment' comes in the carnage that unfolds behind him as the other five riders all fall.

A race to the line involving the walking wounded ensued, mainly on foot not bike, in an attempt to gain valuable Olympic qualification points.

Malaysian rider Azizulhasni Awang is helped back onto his bike by his coach and carries on to win bronze. Neither he, not his coach, noticed that his calf had been impaled on a 20cm ‘splinter’ of wood from the track. Ugh.

After crossing the line he was stretchered away and was unable to receive his bronze medal on the podium. Apparently the medics left it in all night, ugh again, and removed it the next morning. 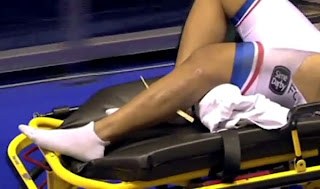