L goes into work for a few hours whilst I take the dogs for a game of footie on the park. When I drive up to meet her later I notice that there is a lad on almost every road junction wearing a pizza box. There’s nothing unusual in that actually but they all seem to have scarves over faces and some even have balaclavas. Sinister.

We collect my parents and head up to Manchester for the Track Cycling. I’ve thought for some time that my father would enjoy a day out at the cycling, although it’ll be exhausting for me explaining all the various different competitions. What I didn’t expect was my mother to be so keen to join us. The more the merrier. 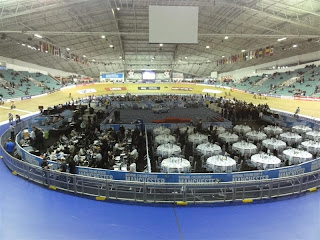 It’s an exciting days racing but a long one, especially for my parents, we don’t drop them back at home until 1.30am. It doesn’t help that they decide to close the velodrome between the day and evening sessions this year, evicting all the supporters into an area of Manchester where there is nothing to see or do except go to Asda for tea. Unfortunately Asda are yet again woefully unprepared for the deluge of hungry cycling fans. This event has been on the calendar for many a year now, so you’d have thought they’d have got the hang of it by now.

As for the cycling, the Women’s Pursuit Team go very close to the world record in winning Great Britain's first gold medal of the weekend. 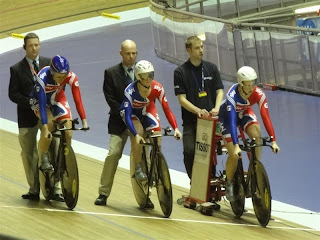 Then Chris Hoy and Jason Kenny clash in an all-British semi-final in the sprint and Kenny impressively defeats Hoy. Unfortunately Frenchman Kevin Sireau has too much for Kenny in the final. Hoy recovers to take bronze. 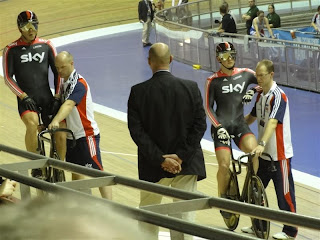 Chris Hoy and Jason Kenny
Geraint Thomas gets the crowd going in the individual pursuit final, storms off into a huge lead over his opponent Australia’s Rohan Dennis and is on course for a world record... Unfortunately he’s gone off too fast, fades and Dennis overhauls him with only a few laps to go. 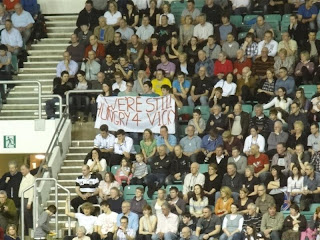 ‘We’re still hungry 4 Vicky’ proclaims a banner, they’re referring to Victoria Pendleton of course, who with Shanaze Reade makes up our potential Olympic sprint team pairing. I’m not sure about Vicky myself, so let’s talk about two young blondes instead. Pendleton and Reade are surprisingly under par and only qualify eighth, and are soundly beaten by our other British pairing of Jess Varnish and Becky James, who qualify fourth quickest and get to race for bronze. Yay, up the blondes. Unfortunately they lose to France. 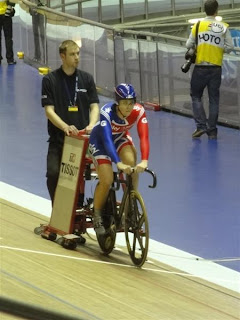 Jess Varnish
We nearly didn’t stay for the last event, the third part of the Omnium, cycling answer to athletics’ decathlon but with six events. In the elimination race, last place is knocked out every two laps and it was well worth staying for. It’s one thing trying to stay in the lead of a race, quite another to avoid being last. The whole idea was an accident waiting to happen, which thankfully didn’t happen, but was great to watch. With two left GB’s Ben Swift was still there before finally being beaten into second place on the last lap.