The End Of A Cultured Week

L outdoes me this morning and runs, whilst I lounge in bed. Though she returns later with the Sunday paper and coffee. Bless her.

After I’ve exercised the boys, I get my own back and run myself. Predominately with the aim of finishing my latest audio book, John Grisham’s ‘The Firm’, which we’ve both been gripped by on the journey to and from Scotland. 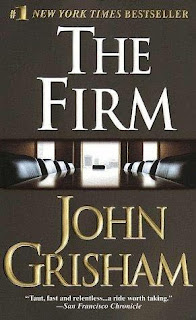 To finish it I’m forced to not only lap the outside of the park, my original aim, but also the inside as well. Knackered afterwards but it’s done now. Another book read, well listened to. This rounded off a cultured week. We watched three films last week including Grisham’s ‘The Pelican Brief’.

We both enjoyed it immensely on audio but knew that casting Julia Roberts and Denzel Washington in the lead roles was miscasting of the highest order and so it proved. The director also clearly failed to get his head around the intricate plot surrounding the story. Disappointing, as expected. It also oddly came on a DVD that we had to turn over half way through, never had to do that before.

The ‘Memory Keeper’s Daughter’ was much better. 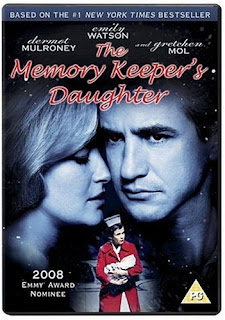 About a chap whose wife had twins, one of which is disabled and he gives it away whilst not telling his wife she’d even had twins. He keeps the secret until he dies, at which point his by then ex-wife finds out. Implausible and I didn’t expect much but it was actually quite good.

Then there was the original 1947 version of ‘Brighton Rock’. 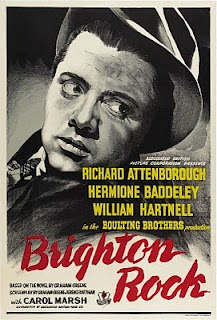 It was good, Richard Attenborough was excellent, although I found the whole thing a bit confusing. All that darkness perhaps. Anyhow that brings me onto tonight’s cinema trip.

I hate remakes of anything and a remake of a film that is highly regarded as a classic of its time, such as ‘Brighton Rock’, should really be avoided at all costs. I haven’t, shamefully, read Graham Greene's book, nor had I, until last week, seen the original 1947 film and perhaps that is why I rather liked this remake.

The book and the film were set in the 1930’s but this remake by Rowan Joffe has shifted the action to 1964 and makes a few slight plot changes. This was bound to upset the purists, just like modernized versions of Shakespeare do but I kind of like those too. Personally I think if you're going to do a remake, at least do something a bit different with it. Straight copies are pointless.

So out goes the mob era and in comes a backdrop out of Quadrophenia. e.g. mods on mopeds on Brighton promenade, only it’s not. We had to go see this film because 1960’s Brighton has been recreated in Eastbourne and we were there when they filmed it. The dogs, well one particular dog, barked all the way through the filming, so there we sit in the cinema straining our ears trying to see if they’ve edited him out or not. 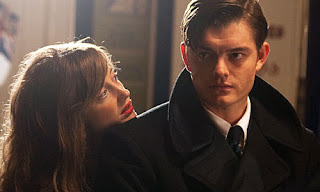 In this version, we get more of an intro and a bit more background to the characters. Not that this makes any different to the likeability of teenage sociopath and wannabe gangster, Pinkie Brown. Richard Attenborough was brilliantly sinister as Pinkie in the original, here Sam Riley (you know Ian Curtis) takes on the scowl but somehow he doesn’t seem as menacing as Attenborough. He's more moody teenager with an attitude problem than a gangster. The effect is much the same though. We feel zero sympathy for his character. Not that we feel any either for Rose (Andrea Riseborough), the nice Catholic waitress who falls for this moody Catholic thug.

Pinkie has murdered ‘Fred’ Hale, a man from a rival gang, and is prepared to cover his tracks by any means necessary. Rose is a potential witness to his crime, so in a bid to shut her up he pushes her into a sham relationship with him. Romancing her is not hard, the poor deluded girl immediately falls for him, hook, line and sinker even though he ignores her most of the time. What does she see him? Though suppose that’s a question we often ask ourselves of people today. 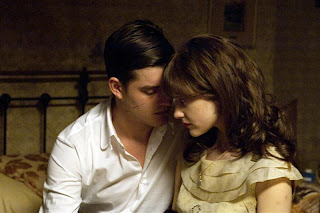 An explanation of sorts is offered when they visit the tower block where Rose lives. A tower block that looks very rundown, particularly considering tower blocks were a bright new idea in the 60’s. Rose lives with her father, a man who is as controlling as Pinkie is. So at least she’ll feel at home with him. Pinkie barters with her father for her hand in marriage, which will prevent her being forced to testify against him until he can find the moment to dispense with her permanently. In the end her father effectively sells her for £150.

Amidst all these crazy Catholics comes the level headed Ida Arnold (Helen Mirren) who is determined to unearth the truth and rescue Rose from the nutter she has betroved herself to. 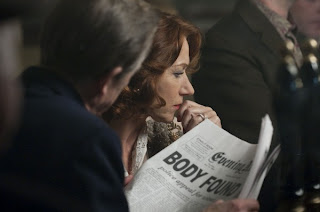 It was a difficult film to remake but having bothered, I think they made a pretty good fist of it. Very enjoyable. Riley is good enough as Pinkie, as is Riseborough as Rose, well pathetic enough at least. It all ends in tragedy of course and I do love an unhappy ending. The classic scene remains, as in the original, when Rose cajoles him into making a record of his voice in a recording booth on the pier. On record he makes it pitifully clear that he despises her and her failure to ever find out what he said on that record makes a touching finale...

Did I mention Son is home? He has a ‘reading week’, when he doesn't have to attend lectures, so he’s come home for the week via a torturous train journey where every other train seemed to get cancelled. In the end, when he’s facing his third long wait of the day for a train, we nip over and collect him from Derby station to save him the hassle. This enables us to have a pleasant family meal out at the local eatery ‘The Wollaton’ and a chance to try and extract all the university gossip that we can.