We have a race tomorrow so what’s tonight’s entertainment... Paul, Yogi, Gnomeo or maybe something light hearted like Animal Kingdom? Hmmm. I’ll ponder... whilst I suffer the football.

I feel kind of sorry for our manager, who keeps tinkering with a team, he can’t add to, hoping to stumble across something that works. Well perhaps he stumbled in the right direction today or perhaps we’ve just found someone worse than us.

As it happens L and Daughter go see the legendary Gnomeo in the afternoon and in the evening we decide on ‘The Fighter’.

You can't say that Marky Mark isn't diverse. From the ‘Funky Bunch’ to Calvin Klein underwear to ‘Boogie Nights’ and an acting career. Now Mark Wahlberg is even producing films and in the case of ‘The Fighter’ both starring in them as well as producing.

‘The Fighter’ is actually based on a true story. It is the tale of ‘Irish’ Micky Ward (Wahlberg) a fighter trying to make a go of it in the ring. One of his coaches is his half-brother, Dicky Eklund (Christian Bale). Dicky was a boxer himself in the 1970’s and 80’s. His main claim to fame being his 1978 bout with Sugar Ray Leonard which made him somewhat of a local legend. Dicky still tells the tale of that fight, over and over again, where he knocked down Sugar Ray. Even though Sugar Ray may have tripped... and went on to win the fight.

Now years on, Eklund is being followed by a film crew, who he believes are making a documentary about his possible boxing comeback. In truth though, Dicky is now a shadow of his former self and the film crew are more interested in his drug addiction.

This habit makes Dicky an unreliable coach and he’s always late for training sessions. Micky’s manager would probably fire him; that is if his manager wasn’t his domineering mother Alice (Melissa Leo). Dicky and Alice organise all Micky’s fights for him but things have not gone well recently. Micky has become known simply as a stepping stone for other boxers on their way up to better fights. 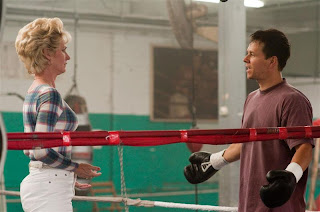 The opening of the film is slightly annoying as we are introduced to the close knit but slightly dysfunctional family headed by the overbearing mother and with half a dozen or so even more annoying sisters. Once the film gets going though, it’s rather good.

After losing four consecutive bouts and being pushed, by Alice and Dicky because they all needed the money, into an unwinnable fight against a fighter from a higher weight division, Micky come to a realisation. He has tried to remain loyal to his family but it is costing him his career. They are holding him back and he knows it. If he wants to get anywhere in the boxing world, something needs to change.

When Micky hooks up with local barmaid Charlene (Amy Adams), she gives him the impetuous to do it and helps him pull free from his suffocating family. Which, of course, they don't thank her for. Adams is way out of her usual comfort zone in this film, this being a far more serious role than anything I’ve seen her do before and she does brilliantly. 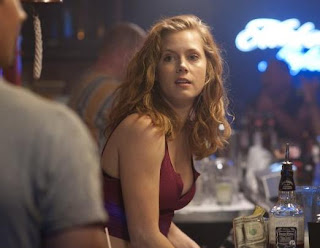 When Dicky winds up in jail, both brothers eventually start to get their respective acts together. Dicky finally kicks the drug habit while Micky gets new management involved and starts boxing again. Mickey O'Keefe is now his sole coach. O'Keefe is a sergeant in the Police and in real life was the mentor of Micky Ward. O'Keefe plays himself, as in fact does Sugar Ray Leonard, who has a small part.

Micky moves up the ranks but still there in the background are his family, his brother still offering advice even from his prison cell. Then Micky gets a shot at the World Welterweight title against Shea Neary. Problem is, with Dicky now released from prison, can he reconcile his family with his girlfriend and his coach and get everyone on side for the biggest fight of his life?

Underneath it all Dicky turns out to be a nice guy, someone you'd actually want in your corner. Though, I’m still not sure about the mother. I didn't really know Melissa Leo before this. Her character is so annoying Leo must have done a really good job. 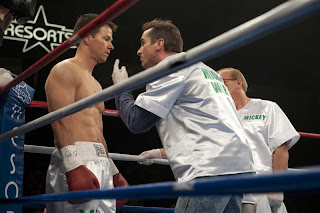 The cast are the real strength of this film, in which Bale is outstanding. It is much more than just a film about boxing and the main 'fighting’ take place not in the ring but outside it. Another good film, in a good year so far.