I’m on the bike on the day that the BBC runs an article about helmet cameras capturing bad driving. Fascinating. Perhaps I should get one. 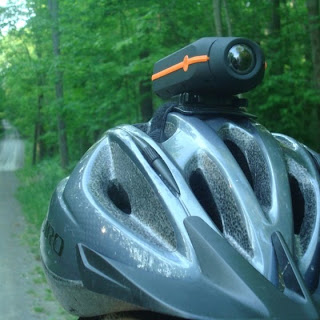 Although L points out that I’ll be on the lookout for trouble to blog. As if.

Today’s ride was uneventful, well just the usual close shaves, so yes uneventful. I suppose I could have filmed the two cars that had crammed themselves into the advance area for cyclists at the lights in Spondon. Although I’m so used to this, I expect it and don’t really take any notice any more.

A fellow cyclist though, wasn’t going to take this lying down and he had tried to place himself in front of both of the cars at the same time. Not an easy task and not a safe one, because there’s no guarantee they will have seen him and his antics. After all they’d ignored pretty much everything else around them so far.

It must be national cancelling week. Squash tomorrow is now off. Opponent attempted his own triathlon the other night - Run/Cycle/Badminton and has done his knee in. I was actually impressed and complimented him on his efforts but he’s not supposed to injure himself.

It has become very windy by the time I cycle home. I left work straight into an extreme head wind but then there’s nearly always an extreme head wind on Pride Park, which seems to have has its own weather system. Thereafter I didn’t really notice the wind and the fact that it only took me only fifty minutes to get home explains why. I take it the wind was behind me.

Dog training goes well but it's quite a sombre affair. One totally healthy dog died in its sleep at the weekend and I learn of another that’s just gone blind. A good reason to give both the boys a big hug tonight, even the gobby one.