North Of The Border

We head up to Scotland this morning via some incredibly pot holed roads, even on M74. In fact especially on the M74, which seems a bit of a dangerous place to have them to me.

It’s a bit warm in Glencoe village when we arrive, although there is snow up on the higher mountains but even the Pap is snow-free.

After eight hours in the car we stay in Saturday night, eat steak and open some wine. Although L has imported Leffe to north of the border, so very unScottish, as is my wine. After the long journey, L threatens to walk the paws off the dogs on Sunday and succeeds. It was only 10k across Glen Nevis but we almost have to carry MD back after he ripped a chunk of flesh off his paw. Whilst by Monday morning Doggo, the old git, has stiffened up after his puppy-like antics skipping up and down the glen.

Luckily for them, they get Monday off as we wake up to snow on the hills. The Pap is now white over. 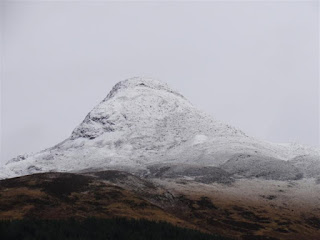 There’s apparently six inches of ‘fresh’ up on Glencoe Mountain. So we go up to check it out and leave the limping two in the car. The snow is good but it’s very windy up there and the runs largely unpisted, so hard on the legs. 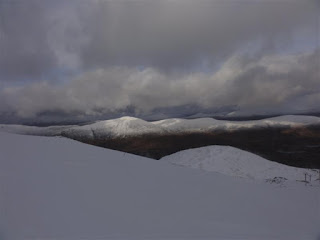 After the skiing, we try and spend some more money at the ski resort by supporting their coffee shop but it’s closing at 4pm so I have to come down the slopes early. Then we try and spend our cash at the Kingshouse Hotel but their walkers bar is shut. There’s a nice roaring fire in their lounge but we can’t take the dogs in there. We’d already discovered that the recently refurbished Glencoe Hotel is closed Monday to Thursday and the Ben Nevis Inn is closed Monday to Wednesday. Everything seems to be closed this week. It’s not easy trying to pump money into the Scottish economy.

The Clachaig Inn is open though and we spend many an evening in there. There a beer from Caledonian called ‘Double Dark’ which surely has to be dark and is, as well as very tasty. There’s also a beer tasting on from the Glenfinnan Brewery. Which we actually skip because all their beers are on the bar anyway but we miss out on the freebies. Instead we finish off with the house whiskey, at 58% probably not the best idea but very nice.

I think it disagrees with me a bit the next day but not as much as Doggo’s diet of sticks and grass disagrees with him. Which he kindly vomits up overnight. 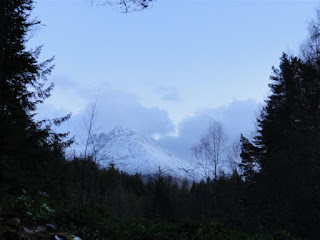 Tuesday, we risk taking the dogs for a run along the Caledonian canal. Only 12k according to my gadget girl’s new GPS watch. A Christmas present don’t you know. MD doesn’t seem to notice or care that he has a bad paw and unfortunately blisters the other front one. Still he doesn’t notice. Tough cookie. Even so we drive to pub and sit in the posh bit, leaving the boys to rest up in the car.

Wednesday is wet all day and the rain is no doubt causing serious damage to the nice snow we had a few days ago. When we do finally drag ourselves out of the house it's for a long wet meander along footpaths on a very indirect route to the pub. Where most of the beer has run out. No more ‘Double Dark’ and we decide it’s best to leave before the whiskey tasting evening starts.

Thursday is another day off for MD’s paws, which he keeps licking. A skill he has honed by licking my feet whenever he gets the chance, not that you wanted to know that. It’s something both dogs, oddly, seem to enjoy or convincingly endure, perhaps out of a ‘man’s best friend’ sort of loyalty thing. I drag L up Nevis Range for some skiing. The snow is good in places but concrete hard snow in others, with icy bobbles on top which makes it like skiing on marbles at times and, yes, the coffee shop again shuts a 4pm. So I don't get one. 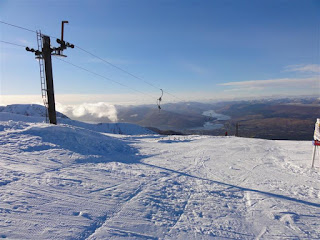 We eat at the posh-ish Isles of Glencoe hotel. Why is this place busy whilst the Glencoe Hotel is shut because it has no bookings?

On our last day we walk the Ben Nevis pony track for a mile or so whilst easily resisting the trek to the top and looping back through the Glen along the river. 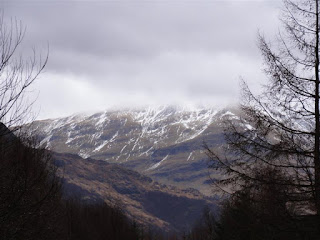 We pop into the now open and very pleasant Ben Nevis Inn for hot choc and a beer. There’s plenty of very interesting info in there about the annual Ben Nevis run. It’s only 12 miles to the top and back. I’m sort of tempted.

Tonight, we finally make the Glencoe Hotel for a meal.

We leave Glencoe early on Saturday morning because I, for some unknown reason, would like to get back in time for the match, which has kind of conveniently been moved to a 5.20pm kick-off for TV. The kick-off change is very odd. Originally the police had insisted on a 1.00pm KO because as it was a local derby, we’re playing Leicester, they wanted to limit the amount of time supporters had to get tanked up in the pub. That was until Sky started waving money around, and then it became acceptable to give everyone the entire afternoon in the pub. Bizarre. It just shows who’s actually in charge.

After the expected defeat I briefly join the protesters who have assembled outside the ground. They are protesting about our illustrious American owners who are running the club on a ‘sustainable model’ e.g. a shoestring. They’ve done a very good job of reducing the overdraft but I just wish they’d stop costing cutting now. Unfortunately they don’t realise that their ‘sustainable model’ isn’t sustainable at Championship level and it’s looking increasingly likely that it's going to take a trip down to League One to make them realise this.