Panic stations. I have a half marathon on Sunday, so need to top load some training this week. I ran yesterday and get up early today to run the last four miles to work. Having now finished ‘The Firm’ I had to run to music. It went well until a desperate call of nature with about half a mile to go, you don’t need details but, it totally ruined my pace.

L meanwhile sends me an email about April’s Derby 10k which has the word ‘seriously’ in it. Blimey. Must be, for want of a better word, serious.

I intend to do another four or five miles on the way home, so naturally it chucks it down at 5pm. Soon passes though and eventually I get my run.

I get home socialise with the dogs for a bit then collect L from work. I escort her down to Rock City for a romantic Valentine’s Day evening.

Is there something going on between Morning Parade and Feeder. The only other time I’ve seen Morning Parade is supporting Feeder (playing as Renegades) in Sheffield last year. The Essex boys, lead by a man called Sparrow, Steve Sparrow, seem to have honed their sound since then and have become the ‘next big thing’ or one of them. Probably the kiss of death really.

They have a range of styles but seem to have cut back on the keyboards a touch and the guitars are a bit more prominent tonight, although some of their tracks do still border on dance rhythms. Technically they are a very capable band but for a new band they come over as perhaps a bit too polished. Lacking in rough edges if you like, this oddly makes them less interesting.

Their new single ‘A&E’ is a good example; it’s powerful and catchy but still lacking in a certain something. They’re certainly not sparing in the effort they put in but after forty minutes of them, it feels like overkill and I’m ready for the main event. 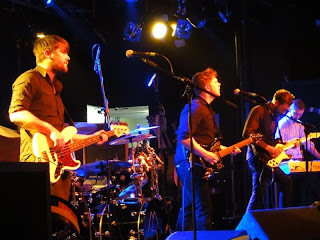 Enthused by the re-emergence of 'Yesterday Went Too Soon' and latterly 'My Perfect Day' on the last tour before Christmas, together with Taka twittering that some 'Silent Cry' stuff could appear on this tour and also Grant appearing to be up for playing something like 'Turn' after it got requested last year, once they'd practiced it, made this a tour not to be missed. So tickets were purchased for two gigs, my home town Nottingham and for Son's university abode of Leamington. So, all set up for disappointment then.

Feeder are without doubt a brilliant live band, one of the best, but also, sadly, one of the most predictable. So it actually kind of looked promising when a roadie came out a few minutes before showtime and started manually altering the setlist with a pencil. Indecision in the ranks? Perhaps they'd suddenly remembered something and were about to revive one of the many underperformed classics they have buried in their hugely impressive back catalogue.

As the ‘The Good, The Bad And The Ugly’ fades out we soon find out what the alteration was. Fears 'Barking Dogs' may have barked its last are unfounded as it is reinstated as the show opener after giving way to ‘Home’ for most of the tour dates so far. This, in fact, transpires as a bonus for the Nottingham public, as ‘Home’, a particular favourite of mine, still appears later in the set. 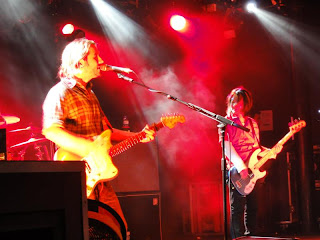 'Insomnia' is next, still a belter, although I thought a little off colour tonight. Perhaps it needs a holiday. They could always play one of the other belters from the same album.

Did I mention Feeder were a bit predictable... The first ten tracks arrive in exactly the same order as this did during the last tour back in October. So no freshening up there then. Five of those are ‘Renegades’ tracks, tracks which continue to sound great live, and the crowd do seem to appreciate them. There are no substitutions for ‘Silent Cry’ tracks, which would have made no difference to the majority of the crowd who probably haven't got either album. 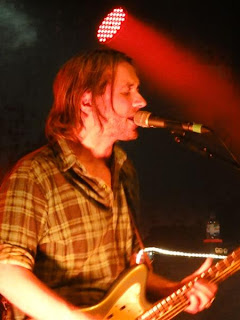 Buried in amongst them are some of the hits from the ‘Comfort In Sound’ and ‘Pushing The Senses’ eras, odd bed fellows amongst the likes of ‘This Town’, for which Taka’s heavy bass reverberates across the floor towards us.

We do have a change behind the drum kit. Karl Brazil has gone AWOL, or rather he’s on tour with James Blunt, who apparently gets first call and probably, no offence guys, pays more. His replacement is session drummer, Damon Wilson and he's seems to mean business with his shirt off from the start. In fact, if anything, he possibly tries too hard at times. I just hope he’s got a good supply of the free water, like we have. Saves paying £4 a pint.

'Seven Days In The Sun' finally breaks the familiar sequence and makes it into the main set, which means at least the encore has been refreshed. Grant likes his teasing intros and seems to be introducing them to most tracks these days... ‘Buck Rogers’... ‘Renegades’... ‘Seven Days’ has one of the best. ‘Come Back Around’ follows and deserves a mention for sounding particularly awesome tonight. 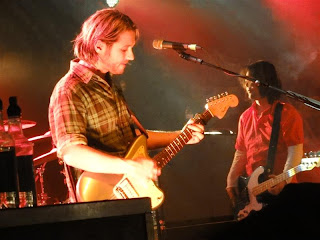 The only ‘Renegades’ track to go out is 'White Lines', back in comes 'We Can't Rewind', which must surely be a family favourite or something. It’s the only old non-single they seem to play.

'High' which often flits in and out of the sets, is in on this tour. I’ve not actually heard ‘High’ for ages, so it’s good to hear it tonight.

The refreshed encore kicks off with (holds head in hands) ‘Tumble And Fall’. An oldie, true but not an inspired one. Then, nicely, a new track called 'Borders'. Which sounds, ironically, kind of 'Silent Cry' era-ish if you ask me...

The obligatory ‘Just A Day’ is followed by a terrific cover of Nirvana’s ‘Breed’. Obviously a personal favourite of Mr Nicholas’s but still obviously not a patch on how a certain underperformed classic from the first album used to close sets. 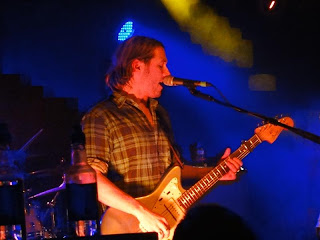 So no 'Yesterday Went Too Soon' or 'My Perfect Day' then but still a nine out of ten gig, with brownie points included for a decent t-shirt. Not enough bands do a tour t-shirt complete with dates these days, so that was enthusiastically purchased. See you in Leamington and, Grant, you know what you have to do for a ten.