Our second trip to Huddersfield in less than a week. We drive past the Uni, and therefore get to see it in daylight this time, on the way to the start at the rugby club. Yep, another race.

The Huddersfield 10k starts in the large shadow cast by the Lockwood viaduct, not that there's any sun, and which thankfully they don’t ask us to run over. I’m sure L would have refused anyway, she doesn’t do bridges. I daren't ask about viaducts. 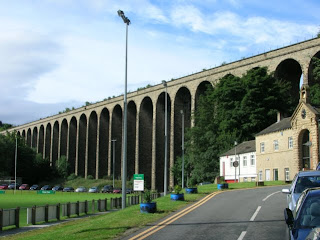 It may not take us a train dodging route over the viaduct but the course is still testing. It is, as advertised, undulating. Bloody undulating. It is a course with considerable PW potential. That’s 'personal worst' by the way.

There are three very challenging (and I’m being polite there) proper Yorkshire hills and several shorter ones. I manage the first with relative ease but struggle on the next two and even resort to a short walk near the top of each, which isn’t going to do much for my time.

They have promised a 'fast' finish and the last mile or so is easier but there’s not enough left in my legs to make it anything like fast.

The marshalling was good but overall I think the organisation could have been a lot better, the start and the finish were both chaotic, and they put out the dreaded mile markers. Which for a 10k is a cardinal sin.

So yes, a PW is achieved and with some ease.

I let L drive home and sulk with the Sunday paper in the passenger seat, which is where I stumbled across an interesting bit of trivia. Apparently today is the 12th anniversary of the last time a Premiership football team fielded an all English line-up, which was Aston Villa by the way in 1999 and they lost.