Such A Thing As A Free Lunch

I have a very pleasant morning on dog duty with Doggo and the one L calls the vicious brute. The park was open, which was a pleasant shock, and we had it to ourselves. So VB had a wild time chasing imaginary squirrels and birds, with the occasional bit of foot biting which forced me to throw a stick for him. Meanwhile Doggo did Doggo sort of things. Sniff, sniff, sniff etc etc. Doggo got his nose out of a molehill long enough to try to take a stick off VB who wouldn’t let him have it and Doggo, the old git, couldn’t catch him. There were plenty of other sticks but of course he only wanted the one VB had or perhaps, maybe, they were simply playing together. Awwww.

VB did manage to get a few vicious barks in on the way back, so his ears are now a little sore where I reprimanded him.

As I drive to work and around the corner into Pride Park I’m greeted by the sight of two horses grazing on the grass verge. Hmmm. Closer inspection shows there is a gypsy infestation in Toys r Us car park. The owners seem to have locked the gates to keep everyone else out, unless it's to keep the gypsies in. Bad call though. It’s half term, they should have just left the car park open as usual. Loads of parents and their screaming kids arriving to shop, whilst poking the horses on the way past, would soon have convinced them to move on.

I have a pub lunch but only a liquid one because there’s been a meeting on at work e.g. loads of leftovers and there’s no such thing as a free lunch... except when there is.

My second committee meeting at the dog club tonight and I arrive armed with enough ammunition to cause quite a stir, with requests for plenty of changes to the format of our summer show. I don’t expect revolution. Revolutions take time but I do get a few of my proposals passed.

L has a nice hot chilli ready for when I get home, but hopefully not made with Infinity Chillies, hotter apparently than chillies used in warfare. Not that I knew chillies were used in warfare until I read that! 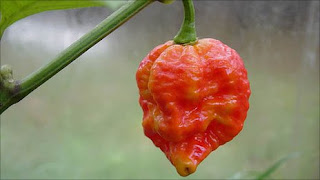