I drive to my parent’s place and run the 5.2 miles into work and then the same
5.2 miles back again after work. It’s not quite the long run I wanted but it gets the distance in, albeit with an eight hour break in the middle.

L still has no email at work so she's taken things into her own hands and gone onto hotmail, proving she’s clearly more technologically savvy than the company who manages her works' email. It’s good to have her back.

As is tradition, Derby exit the league cup at the first round stage to a lower league team, again. Apparently this is something like seven times out of the last ten seasons. This year it’s to Shrewsbury who storm in to a 3-0 half time lead whilst Derby are playing tappy tappy keep ball on their own half way line. It's all very pretty but totally ineffective, particularly once the opposition get bored watching it, take the ball off you and tuck in it into your own net. Three times.

Our great leader seems to give up at this point and disappears. Rumours that he’s gone home are apparently unfounded and he’s simply sulking in the dugout. I don’t know if it’s related or not but once he stopped barking instructions from the touchline, the team suddenly perked up, abandoned the ineffective passing game and started hoofing it forward instead. This yields two goals which means we still lose but by the much more respectable score line of 3-2.

After a brief drink with my folks, I hot foot it home to see if L needs any more Will Young downloads or any artiste downloads for that matter. Well any that might amass favours in kind. Things get a bit distracted though when I arrive in Nottingham to find that there are a groups of eleven-year-olds trying to riot just down the road. The fire bomb attack on Canning Circus police station even makes national news. 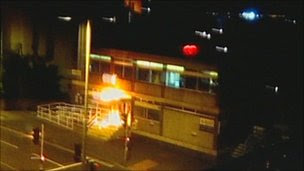 Of course tonight is the night Son chooses to head into town for a night out, only to find it closed and heads east of the city instead to a friend’s home neatly nestled between the riot hotspots of St Anns and Sneinton. Can we pick him up at midnight he asks? No.