The firebombing of Canning Circus police station turns out to be a bit of an exaggeration. It’s a bit singed is all you can say. The intent was there though, it was just lucky it was a bunch of kids attempting it and not someone who knew what they were doing. Still there’s a nice video of it on the net.

As for the city centre, if you’re shopping for trackie bottoms, or those trainers that don’t lace up, you’ll be out of luck. Everyone else will be fine.

At least the England game is off, which will please almost everybody except the FA who seemed to arrange it against everyone else’s wishes.

We have an important birthday in the house today. Doggo is ten, the old git. So I go out to get him a cake, which isn’t easy. All the birthday cakes are smothered in chocolate or icing, which is clearly no good for a dog. What were Sainsbury’s thinking? In the end I manage to find a small fruit cake which we decorate with ten candles, which once lit scares the life out of him and we have to hold onto him so that he doesn’t hide from his own birthday cake. 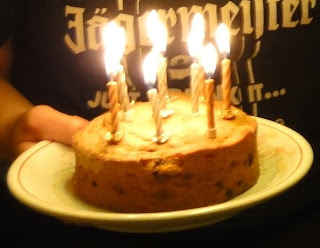 Then L asks a favour. Will I run with her... at race pace... as a personal trainer would do. Blimey, she never asks me to run with her, and that’s at her race pace not mine, by the way. I tell her it’s a date. Yay, I have a client.

Of course you’re not going to regret it Dear.

We go out and jog for a km and then run the next km at sub 5:30 min/km pace. Then we repeat this three times. It seems to go well. We hit the pace the first couple of times, the third is a little slower due to the third section ending uphill. A good workout though. I await to be summoned again. Question is, is will she be as grateful as she was for the Will Young download?