We are camping at a dog show, as you do. We arrived last night and squelched our way across the field to our designated camping spot right at the back... They obviously have us down as trouble makers or maybe they’ve been pre-warned about MD’s vocal chords. They seem to have had rather a lot of rain here.

Then this morning we squelched our way back across the field and out on to the road, temporarily waving goodbye to the dog show. We are just using their camping facilities, or to give it its proper name, field, for the moment. I’ll be competing tomorrow.

We’re at Garstang at the moment but now we’re heading for Morecambe, where the weather is incredibly bleak and terrifically windy. So nice weather for the Morecambe Mile. I’m so glad I’m not involved. It’s just L, a couple of hundred others and some rather fearsome looking waves. Lovely weather for swimming... 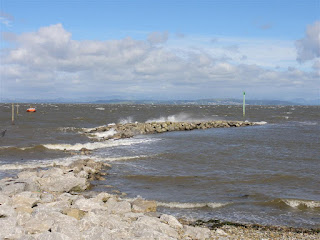 On the plus side, the Morecambe and Heysham Yacht Club who are hosting the event are churning out the bacon rolls, flapjacks and hot drinks at a rate of knots. They’ve even got a table full of cakes for later. So the organisation is top notch.

As everyone else gets wetsuited up and heads out onto the front, the dogs and I try to get a good viewing position, somewhere where we won't get blown over the sea wall. Then we are told of the delayed start, which is greeted by mostly relieved looks all round. Then we’re told that they’ve moved the start. Preferably to warmer climes but no just a hundred yards or so down to a 'calmer' bay. The waves are oooh 5% smaller here. We watch a couple of boats struggle out into the sea with the buoys which will mark out the course, the boats bobbing up and down on the ever increasing tide. 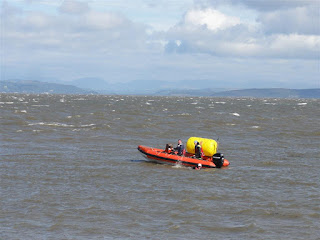 Then a chap who looks kind of official jumps up on a wall, calls everyone round and tells us it’s all off. Cancelled. They’ll be no Morecambe Mile. A few cries of ‘Oh no, I was looking forward to a good buffeting against the rocks’, or something like that, go out but are quickly drowned out (if you excuse the pun) by a relieved round of applause from everyone else. It’s disappointing but there’s always the cakes.

Then we partake in a bracing walk along the sea front, to walk off the cakes and to try and find Doggo a bit of beach. Of which there is none, the tide is still stubbornly in and still looking fearsomely unswimmable. 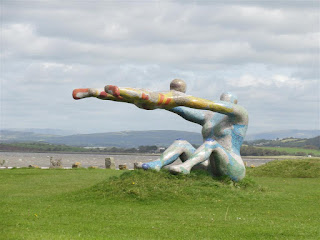 This is how windy it was.

Then we head back to the dog show and squelch our way across the field to our camping spot. Later we head down into the village of Scorton and sit romantically under a canopy, because we’re not welcome inside the pub with the dogs. We watch the on-off rain while sipping beer and eating our way through an undeserved three course meal including a not too bad cheeseboard.