The Clock Must have Stopped

We could have been at Welbourn today, which although the course didn’t suit me, being off-road, they had a free pint for all finishers last year, which did suit. Tempting... but seemingly not as tempting as the very unflat (370m of climbing) Leek Half Marathon.

The start at Brough Park Leisure Centre is worryingly downhill, very downhill, and what goes down must come back up. 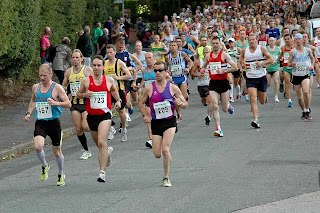 The route undulating route takes us through Meerbrook and past Tittesworth Reservoir. At which point I realise that I’ve done a cycle event along these roads, which wasn't easy either.

Then there's a short section along a main road where we are coned to one side. This slows the pace and gives you time to contemplate what is ahead. What's ahead is a steady climb through Upper Hulme and then up to The Roaches. Challenging is one word to describe it. No pain, no gain, someone once said.

The six mile point, and the drinks station there, more or less marks the top, which reveals some outstanding views. Now the promise is of three miles of descent back to Meerbrook. Hmmm. As I run along some nice quiet country lanes (quiet that is apart from a few impatient 4x4 drivers) admiring the view we descend a bit, but then go up a bit, then down a bit, then up a bit more... this isn’t my idea of downhill. Then a sharp left and woah... it’s like plunging off the top of a rollercoaster. This is down, brutally down. Though I’d still dispute the three mile theory.

The drinks stations even offer sponges, which I approve of. Not enough races make use of the humble sponge as a cooling aid.

Then it's a simple matter of retracing the first few miles back to Leek, which from experience (an hour ago) we know the profile of. This includes the last half mile up Park Road, which is an uphill drag that reduces quite a few to walking and possibly tears. Wimps.

They say expect to be 5 or 6 minutes slower than in a normal flat half marathon. So I’m kind of stunned to see the race clock still with 1:42 on it. Must have stopped. That's only a minute or slower than ‘flat’ Newark last week. I actually ran the second half of the race over two minutes quicker than last week. It had a bit of a downhill slant to it but there was still plenty of up about it, whereas last week was supposedly flat. A promising stat I feel. Something must be paying off.

L doesn't share my enthusiasm for the event and doesn’t have the best of days but we can't all be brilliant every week.

Now for the hardest task of the day, Uni paperwork.

Then it’s time to hit the Sunday Lunch and the Abbot.