I head into town this morning with Daughter, to sort out a student account. Only to be told the student team don’t work Saturdays. How very studently. Still a useful trip though, as we have now been told exactly which hoops to jump through and in which order, thereby hopefully avoiding the NatWest/ Railcard fiasco we had with Son last year.

It also means I get to see the Nottingham Riviera for the first time this year... 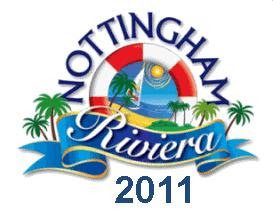 and hopefully the last.

The new football season is upon us, about a month too soon as usual. I had hoped the Derby team news might ignite some enthusiasm in me but it hasn’t. As I’ve already said, I’ve not been terribly impressed with Derby’s signings but at least we’ve made some. Last year’s small close knit squad approach clearly didn't get us anywhere, whether this year’s big baggy jumper approach will work any better, who knows.

Against Birmingham today, the side put in plenty of effort and endeavour, which goes some way in making up for our lack of talent. Until we let in a trademark soft goal and go behind.

Apparently Sky Sports are doing that live league table thing already. This of course is only really of any use in the final game of the season when promotion and relegation is at stake and is massively pointless the rest of the time, let alone in game one. I'm told Derby slip to third bottom as they concede that goal but then climb valiantly into the top six as they equalise and then as we take the lead go briefly top of the league. Perhaps it does have some point after all.

So we win the opening game for the third year in a row. Not that that’s got us anywhere in the last two years either but we're third at the moment...

Back home I take the boys for a late park session and then meet L down the local for a quick one or two. I have a 100k bike ride tomorrow so won’t be having much. Unfortunately I also seem to have picked up a bit of a stomach bug and skip food, which doesn’t bode well for cycling 100k.