As we meander back from Skye to Glencoe, I can reflect on the Isle of Harris which was actually rather magnificent. 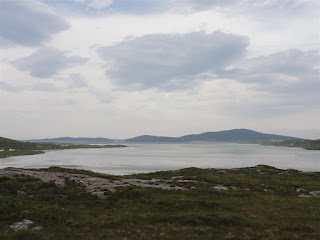 Certainly one of the most amazing places I've been to. It was a heady mix of mountains, lakes and rivers alongside a rugged coastline that also boasted mile after mile of golden sandy beaches. 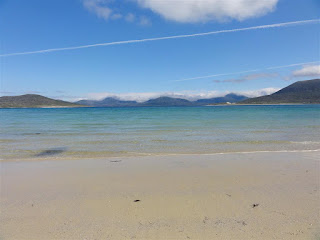 We even camped alongside such a beach at Horgabost on Harris. Heaven for a beach loving dog like Doggo. 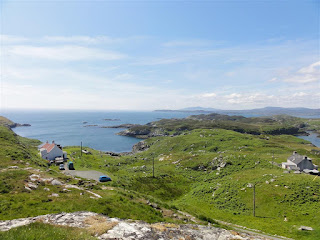 The Western Isles were supposed to be notorious for wind and rain but we had little of the former and even less of the latter unlike the rest of the UK this week. 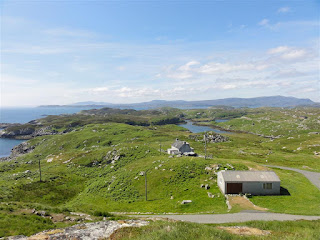 It's great walking country too. Even if the coffin trail was accompanied by some really ravenous horseflies. 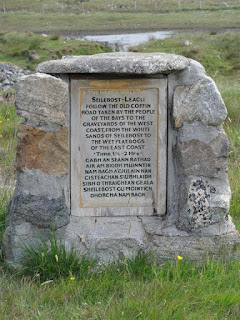 The walk to Harris lighthouse was rewarding too, with coffee laid on in the lighthouse itself.

Christian and Anastasia keep us amused on the journey and I think amused is the right word. L though top and tailed that book with another one. One about pancake sex... which is entirely new terminology to me. 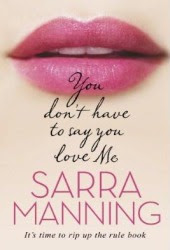 That book caused L to ask whether it’s true that all men want is a girl who is easy on the eye, not too taxing on the frontal lobes, and who will drops her knickers for a glass of white wine? Hmmm. No comment.

No pub quiz this time in the Clachaig, so neither of our frontal lobes are taxed. Other than by the beer and a couple of whiskeys randomly picked from the huge selection. We've barely seen a proper pub all week, the one thing lacking on the islands, so we're due a bit of a session.