So Near And Yet So Far

The sun is out, quick get the grass cut, so that we can see out of the windows again. Job done, I try and get the hedge cut as well before this slim weather window closes. I’d almost finished the front hedge when the rain came. So near and yet so far. I try and continue until the threshold for electrocution has been well and truly breached. After which sweeping up wet hedge cuttings isn’t much fun or very easy.

Its sods law that the day after I’ve enter us both in the Fleetwood Half Marathon over the August Bank Holiday, I find out that the accompanying dog show in the area, where we were to have camped, has been cancelled. Normal campsites are going to be rammed that weekend, so the whole project is now a lot more complex.

I assume she means the film and a not a evening of roll play. She says if I argue it’s going to be ‘Magic Mike’ instead. I have no idea what that is and I’m not sure I want to find out.

Then, I’m saved by the trailer, which L re-watches and changes her mind, so here we are doing ‘Dark Horse’ and a Broadway Bite instead.

Abe (Jordan Gelber) is a thirty-something guy who has not only failed to leave the family home but also hasn’t left behind his childhood. As his room, a shrine to cartoon and fantasy characters galore, testifies.

He has a job, sort of. He ‘works’ for his father (Christopher Walken). ‘Work’ is a loose term here. Abe does little, if any. Most of his work is done for him by a colleague, Marie (Donna Murphy). Abe doesn't even like the job and shows his contempt for it by wearing t-shirts to the office whilst everyone else is dressed for work. 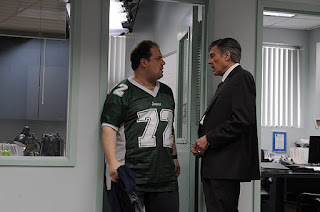 His failure to get on in life though isn’t him fault, it’s everyone else's. Yep, he has a huge unjustified chip on his shoulder too. His mother (Mia Farrow) dotes on him, despite owing him hundreds of dollars in backgammon debts, whilst his father, Walken redefining deadpan, views him as total disappointment. He is not, of course, his brother who is a successful doctor but Abe has always been the ‘dark horse’ of the family. 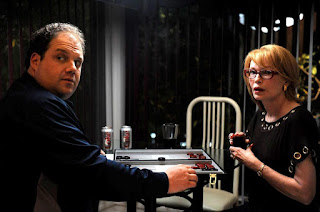 When Abe foists himself up a woman he sees at a wedding because she is the only other person, like himself, not enjoying themselves, he senses that perhaps here is someone depressed enough to want him. The woman is Miranda (Selma Blair) and even she is uncomfortable when Abe asks for her number.

When he calls her for a date, she's too polite to say no but then forgets all about it. Not a problem, he sits outside her house in his car until she gets home. Abe then quickly proposes marriage and surprisingly she considers his offer. Having once dreamed of being someone, Miranda has now her lowered sights significantly. Perhaps she should give up on happiness altogether and settle for a loveless marriage and children with a guy... like Abe. 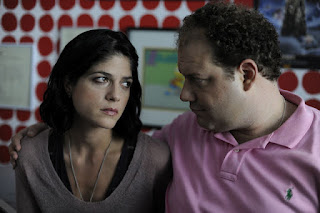 As she accepts his offer and kisses him, she is pleasantly surprised that it isn’t as horrible as she suspected but now she has something to tell him. She has Hepatitis B, which is contagious, possibly deadly although possibly treatable and now he's been exposed to it. Oh and she’s still big pals with her ex, Mahmoud (Aasif Mandvi), from whom she probably got it.

So Abe tries to return his new fiancé to the ‘shop’, insisting he has a receipt... yep, the film gets more and more surreal from here onwards. We learn that Abe’s work colleague, the rather plain Marie, actually lives in a swanky apartment, drives a flashy car and is a sexual cougar in her spare time or maybe not, since, midway through, Dark Horse begins existing simultaneously in the real world and inside Abe’s fantasies. Which includes his own death. I think. At least I think that wasn’t real. 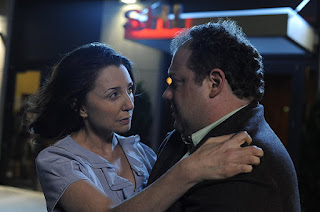 I conclude that America much have as many freeloaders as we have here in the UK for director Todd Solondz to have such a dig at them. Nothing is Abe’s fault or his problem...

The film makes its point in a unique but often confusing way. Leaving you not knowing what was real and was wasn’t, just like Abe.