L sends me to work with homemade Granola. I’ve always avoided Granola as I have no idea what it is. It looks just like muesli and now I know it tastes a bit like muesli, although perhaps muesli on performance enhancing drugs.

The latest load of... on the BBC website, which categorizes L has having the body of a weightlifter.

She takes that badly. Don’t know why when you look at GB’s Zoe Smith who’s been impressing us with a new British record this week. 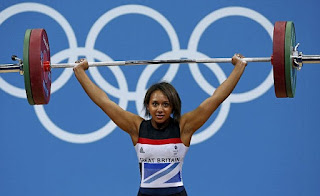 This 'clever piece of technology' then tell me I have the body of a basketball player, rower, tennis player or a pole-vaulter. Female ones. Clearly I’m not tall enough to be a male basketball player... Or possibly I may be a male Moldovan archer. I think not, although that has just about covered everything. I’d love to be able to pole-vault.

L's sister is a 100m sprinter, a male one. If only she'd have known earlier she'd have done some training.

L would rather be a sailor, having watched Ben Ainslie and co. Sailing? She worries about getting a puncture on her bike, imagine the sleepless nights about capsizing.

MD is due at the vets tonight for his annual booster and he’s terrified. I suppose with good reason, not only did they once remove something from underneath his tail, last time they squirted the kennel cough vaccine up his nose. He toughs it out.