Daughter moves house today, moving a couple of miles down the road in Sheffield. We moved Son the other week and got all his stuff on one half of the back seat, managing to transport both him, his girlfriend and the two dogs all at the same time. We’re not expecting this to be as easy but one car load should be enough I assume? Wrong.

We seem to be taking all the fixtures and fittings from the old house with us, as advised by the new owners of that property. Which would actually be in direct contravention of the tenancy agreement and so allowing them to keep the deposit... I’m sure they’re not that sneaky and are just using the students as a means to gut the house.

Daughter and I have a lively discussion on the merits of this strategy before we leave some of it behind. The less clutter the better, we are still administering therapy to her bedroom at home, which has suffered from many years of her magpie tendencies.

Her new area of Sheffield, Hunters Bar, is really rather nice, too nice for students. We find a really nice pub, The Lescar, after only a bit of walking around in random directions. 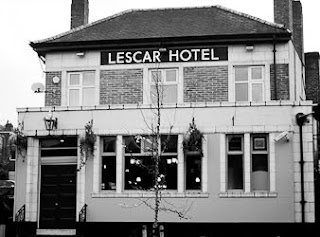 The papers were full of it today. The Sunday Times had him on the front page and then had three full broadsheet pages of coverage inside. What’s going on? Bandwagon jumping of the highest order but not before time. It took a while for the press to wake up to what was happening over in France but they got there in the end.

So today, Bradley Wiggins rolls in to Paris in yellow having become the first Briton to win the Tour de France, in oddly one of the dullest races for some time... no complaints though. Wiggins was the favourite from the off and never looked like not winning. It’s a massive achievement for him, for Team Sky and for Great Britain with Chris Froome second overall and British riders accounting for seven stage wins out of twenty-one. 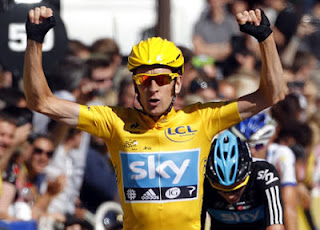 Mark Cavendish won on the Champs Élysées for the fourth year in a row, with Wiggins leading him out, and won two other stages even without the lead out train that he’s accustomed to having.

The highlight for me though, apart from Wiggins winning and then getting up on the podium to announce he’s ‘going to start drawing the raffle numbers’, had nothing to do with Team Sky. David Millar’s win on stage nine was just superb and I was so pleased for him. Eight years, a drug ban and a reinvention (as a spokesperson for drug free cycling) on from his last Tour victory he tasted victory again and I bet it tasted real good.