Today’s dog show in Solihull has been moved indoors. Luckily for them it was scheduled in the grounds of a riding school and their indoor arena isn’t booked this weekend. The reason being that all the fields over here are still white over with snow. Clearly Solihull is colder than the rest of the midlands. 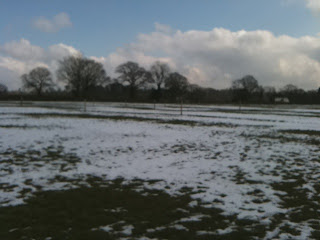 My first run with MD comes very early, five minutes after we arrive and bravo, clear round! I don’t think his elderly limping handler held him back too much. The ankle is still not great, so Monday’s 10k on Wollaton Park is looking very doubtful. The curse strikes again.

We end up joint 6th, which isn’t bad for starters. It also means we go into a runoff for 6th and 7th places, which we win despite 5 faults. Not being too bothered about whether it's 6th or 7th my main aim was to go quicker than in our first run. Which we do, by half a second but MD brings a pole down.

Then it’s snowing again and Doggo does his warm-up by going for a roll in it.

After two more runs with MD, one excellent but with a pole down, the other awful (my fault) and a clear run for Doggo in the Veterans, it’s time for our main objective of the day. This is the qualifier that took us to Malvern last year. Latest year it was sponsored by Alpha Dog Food, this year’s it’s sponsored by Drontal Worming tablets... I hate to think what you get for winning?

Our run is simply brilliant and the fastest so far. The judge stands there clapping... the crowd were cheering... a little. Then the final pole trickled gently off its mountings, in slow motion or so it appeared. Damn. Five faults. No Malvern.

It was really galling as nobody goes quicker and goes clear. So sadly 1st becomes 14th. Almost Greatness.

Back home later, L and I head into Stapleford to Nottingham’s pub of the year, the Horse and Jockey. Which is a place I’d never considered going in before.

When we get there, things just get better and better. They have a Stout and Porter festival on. Wow. Its four pints for £11. Wow. I think we’re staying here all night. 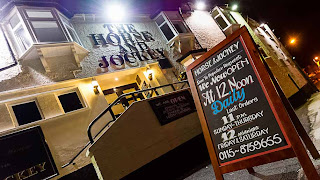