It’s zero degrees but the sun is out so I bike.

There is still some snow around. 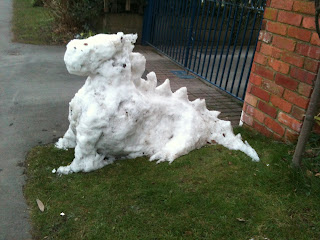 Although mostly the snow drifts have been replaced drifts of grit. They have dumped so much of it on the roads, which combined with some very dry weather, has simply left it all piled up in the gutter. My wheels kick up clouds of it as I bike through dunes of the stuff at the side of the road.

The other problem is I’ve put on far too much. That’s as in clothes, not weight. Then again, perhaps both. Anyhow, I’m well hot by the time I get to work.

L spends the morning filling in on reception at her work and listening to Simon Bates. Who is still going strong, now on Smoooooooth Radio. Still doing the Golden Hour and his mushy story bit. None of which I ever believed. L is apocalyptic at that, clearly a believer. Perhaps I'm just a sceptic.

She threatens to write in and request REM’s ‘Tongue’, one of ‘our’ songs. Although I'm not sure that's quite the sort of story they usually broadcast. I’ll pop it on the hi-fi tonight. Although, Daughter's home. Looks like we’ll have to slip her a tenner, like the old days.

We go to a different pub at lunch, The Waterfall, for variation. The beer won’t be as good but perhaps the food will be better. The pie isn’t. It’s distinctly average and comes in a dish. I hate pies in dishes. The Abbot Ale is decent though.

Unfortunately 5% Abbot + Pie and Mash + Cycling to work = doesn't bode well for a decent performance at squash. I'm not wrong.