We take a trip to the gym today, where my ankle can cope with the bike. I try and read my book on audio but fail, the background music in the gym was just too loud and I had to go back to drowning it out with my own.

In the evening, it’s film time at Broadway again.

The film ‘Good Vibrations’ is his story, a biopic of his life. Terri with an 'i' (Richard Dormer) lost an eye when he was a child but this didn’t hold him back and fitted with a glass eye, he opened his record shop on the most bombed half mile in Europe in late 1970's Belfast at the height of the troubles. 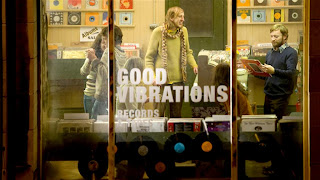 Hooley had seen his friends divide up along political and religious grounds as the troubles escalated. He never felt he belonged in either camp despite coming from a political involved family, having a communist leaning father who was an expert at losing elections.

Instead, inspired by the local band Rudi, part of the emerging punk scene, who seemed as oblivious to this religious divide as he was, he tried to bring these camps together using his passion for music. In an ever increasing amount of cigarettes, beer and brandy everything else falls by the wayside, including his long suffering wife Ruth (Jodie Whittaker). Considering the on screen scale of his consumption, it is amazing he is still alive today. 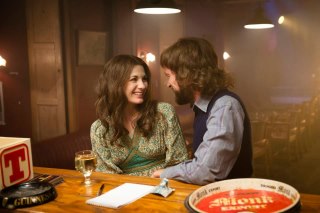 Hooley helps emerging punk bands like Rudi and another band he discovered, The Outcasts, record and distribute their music through his Good Vibrations shop, label and concert promotions.

Many thought he was mad and they’d be right. He was also possibly the worst business man ever born. Even when he fills the Ulster Hall for a concert he still makes a loss. Every so often he appears to be on the edge of a major breakthrough, only each time managing to snatching defeat from the jaws of victory.

When a certain Fergal Sharkey begs him to release a record by Sharkey’s band The Undertones, who were a far from punk looking outfit in jumpers their mothers must have bought for them. Hooley was initially reluctant, until he hears the record itself.

He releases ‘Teenage Kicks’ on the Good Vibrations label and then hikes it all round London trying to get a major label interested. No one was but he did manage to get a copy to John Peel. Who played it not once but twice, in a row. The first time he’d ever done that. The Undertones were launched, Hooley wasn’t and again lost money. 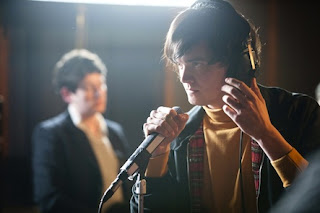 Meanwhile Rudi and The Outcasts never hit the big time at all.

Film wise, the script could be pacier and there’s no real plot, it is more a montage of the key moments in Hooleys life but its informative and at times humorous. It is a film about the power of music and that music is of course excellent.

To this day the record shop still exists, although it has closed and reopened many times.