I walk the boys this morning, so that L can get in some cherished gym and swim time. We were shadowed the whole walk by the bin lorry. Which oddly MD didn’t have a problem with but Doggo has always been freaked out by big things that go whoosh (as they apply their air brakes). MD does have a word with his least favourite black terrier, from three streets away.

L has always had a thing for Icelandic band Sigur Rós and once mentioned it would be an ‘experience’ to see them live. So naturally I’ve been stalking tickets ever since. However once I’d managed to get tickets for this year’s first UK tour in five years she seemed to have gone off the idea. Well it did involve a trip to Wolverhampton but it'll be a experience right?

We arrive a bit late to find a chap behind the safety curtain twiddling knobs and swigging from a bottle of something. I wonder if he is Blanck Mass, the support act. Although the Civic website actually says support is by Declan Allen, who’s an associate of Blanck Mass, who is in itself the solo project of Benjamin John Power of the band Fuck Buttons.

If he is the support, nobody seems to have told the audience, who aren’t actually taking the blindest bit of notice of him. It doesn't help that he's totally instrumental and sounds like background music.

Perhaps if they lifted the curtain? Too obvious perhaps. It’s an interesting gimmick, performing all your set from behind a curtain. Some performers obscure themselves with smoke but a curtain?

Finally he finishes, gets a round of applause from some of the crowd and a what the f*** look from everyone else who wasn’t aware they’d missed something. He had a nice light show but overall did that work? Not really. Not for me anyway.

There’s no Justin Bieber style lateness from Sigur Rós tonight, in fact they come on slightly ahead of schedule. I also owe an apology to Mr Mass, it seems the safety curtain thing is not of his doing because Jónsi starts by performing a bow guitar solo from behind the curtain. Perhaps it’s not Jónsi, who can tell.

I miss a lot of the visual spectacle of the first few songs because I’m too busy trying to see how the curtain can be detached, if at all. Come on guys, shift that bloody curtain now. If only because, if you don’t, my photos are going to be so crap.

Finally, three songs in the damn thing fell down or was it pushed. 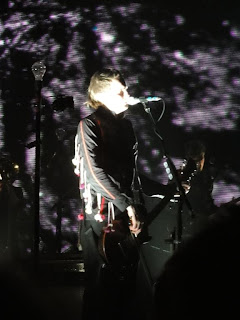 By the way, this is my first Sigur Rós gig, perhaps you can tell. It is, as anticipated, an experience.

Tonight we have, I’m told as I’m no expert, a mixture of brand new material and old classics. Not last year’s first album in four years ‘Valtari’, which has apparently proved to be untourable, save presumably for the one track ‘Varúð’ that is played tonight. 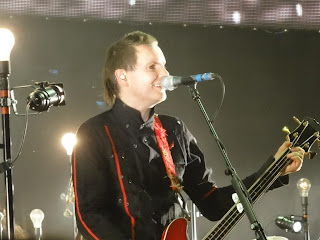 The setlist pulls heavily on the albums ‘Ágætis byrjun’, ‘Takk...’ and the one with just brackets for a title. Again, so I’m told. Although having revised heavily for this, I still couldn’t put names to tracks, other than ‘Hoppípolla’ of course. Everyone knows ‘Hoppípolla’.

With the curtain gone, I can count the band which, including violinists, trombonists and the like, I think comes to 13 or 14, although they are officially now just a three piece. 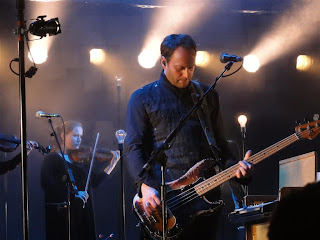 A huge curved widescreen TV delivers images above the band. At one stage the visuals were of a rock face going down making it look as if the stage was rising, until we popped out of the top, of what I think was a volcano and I wonder how much they paid those people to stand on craggy rocks switching their torches on and off. Yep, it’s visually intriguing. 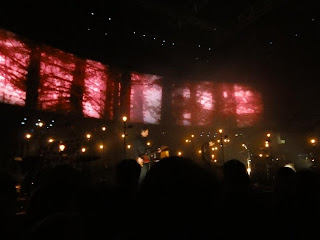 Musically intriguing too of course, I am supposed to use words like hauntingly beautiful. So I will. Hauntingly beautiful and with not a word of English spoken, apart from a couple of thanks you. Actually probably very little Icelandic either given Jónsi one man crusade for his own language. 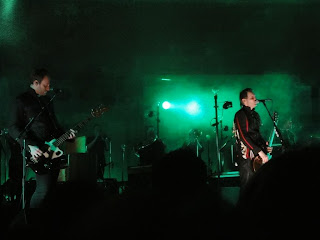 With another new song they close a majestic 90 minute set. I actually think I prefer the new songs, much heavier and darker, perhaps if the ambient ‘Valtari’ hasn’t worked out they’re planning a heavy metal concept album next.

The encore disappoints a little. Choosing to play two of their classics sounds a good idea on paper but when both clock in at over ten minutes, it distracts a bit from the experience that went before.

Still I’m impressed. I always swore I would not allow anything with a name like ‘Hoppípolla’ inside my head. Failed.