The Deadline Is Tonight

The dogs and I are on the park again this morning, getting in the way of the various Military Fitness groups. The instructors seem to be enjoying it far more than the participants, particularly the chap who seems to have bagged himself a girls only group, who he has crawling en block towards him. Nice work if you can get it, although I feel he is taking the Michael a touch with them.

Meanwhile L is frantically page turning her way through Cloud Atlas, the deadline is tonight.

So to Broadway, a few naughty pints (race tomorrow), a meal and Cloud Atlas. Based on David Mitchell's 2004 novel, this must have been a huge challenge for the filmmakers to adapt. The book has six radically different stories from six different time periods but unlike the book, the film intertwines these. This I thought would make it impossible to follow, particularly for someone like me who prefers a linear plot, but no, it is done well and works brilliantly. I have little trouble keeping track of who's who, what's what, where’s when etc, as the film cuts seamlessly from one century to another, often cleverly dropping us in a similar situation when we arrive there.

As for the plot, well there’s a lot of it and it would be bordering on the insane to attempt to summarise it but here goes... 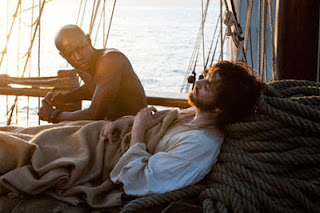 We start on board a ship in the 19th century with a man called Adam Ewing and a runaway slave. Then we’re off to 1930’s Britain and a bisexual English composer called Frobisher who is reading Adam Ewing diary. 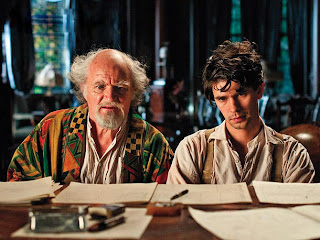 Then its 1970’s San Francisco where an investigative journalist called Luisa Rey meets Frobisher’s gay lover forty years on and also reads Frobisher’s letters to him. 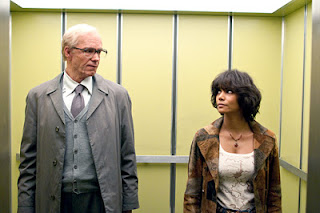 In present day Britain, a publisher called Cavendish receives a manuscript of a novel based on Rey's life while he is in hiding, against his will in a nursing home, from the associates of a gangster whose book he has published. 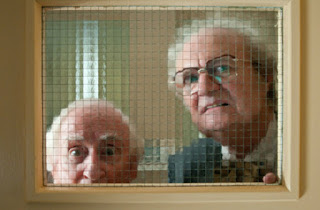 He is inspired to write a screenplay of his own story, the film of which is then watched by Sonmi, a genetically engineered fabricant in 2144 Seoul, while she is on the run. 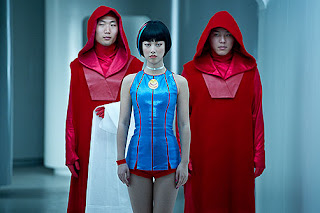 She is executed and becomes the goddess than the tribesmen worship years later, 106 winters after ‘The Fall’, where pretty much everything has fallen apart and humanity has ended up back where it started, living in mud huts and caves. 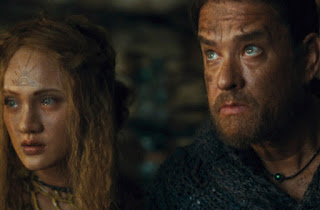 There are many themes going on. Oppression, freedom, destiny, the gradual increasing dominance of the establishment over everything, the idea that our actions affect others throughout time and perhaps reincarnation. What fits in nicely with this reincarnation concept is the fact that all the principal actors play different characters in each story.

So Tom Hanks, Halle Berry, Hugh Grant, Jim Broadbent, Hugo Weaving, Jim Sturgess, Xun Zhou, Susan Sarandon, Keith David, James D'Arcy and Doona Bae appear many times. If you can spot them and often you can’t because they may have been aged, or had their race changed or even they may have changed their gender.

In the end credits, each actor's name appears with a clip of each of their roles. Everyone stopped to watch this, and some roles were so well disguised that there were gasps of amazement as the audience discovered who played whom.

Cloud Atlas will entertain you as much as it will infuriate you but that is no bad thing. Really though there's simply so much to debate about it, that you should just go see the film. Don't try to understand it, just enjoy it. I actually thought I was going to hate it going in but I was sorry when it finished.

You also would have thought this mad cap idea would have been a shoo-in for several Oscar nominations, Screenplay certainly, Editing, Makeup etc, if not for the acting roles which are good but not spectacular. Still, if Daniel Day Lewis can win for one good acting role, what award do you give the actors here, several of which put in six. Sadly, not a single nomination.