Parkrun, a Full English and an afternoon siesta before heading over to Derby on the Red Arrow. Tonight we’re at Quad to see Child 44.


Leo Demidov (Tom Hardy) is a Ukrainian orphan, a survivor of the great famine which killed millions in the early 1930s. He is adopted by a Russian officer, becoming a soldier in WWII where he helps storm the Reichstag and hoists the Soviet flag on the roof.

Post-war Leo becomes a MGB investigator in Soviet Russia. Working for a government that takes a dim (and deadly) view of any one who expresses a point of view contrary to their own. This is a country where everyone is looking over their shoulder and with good reason. Life is very cheap if you rub the wrong person up the wrong way.

Leo is appalled when the young son of his friend and fellow agent Alexi (Fares Fares) is brutally murdered but his death is labelled ‘a railway accident’ by the MGB. According to Stalin murder is a capitalist disease and officially there are no crimes in the Soviet paradise. Leo is given the unpleasant task of presenting the police report to the family. 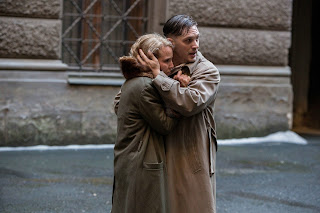 During another MGB investigation, an alleged ‘spy’ reveals under torture the names of seven ‘contacts’ and among them is Raisa (Noomi Rapace), Leo’s wife. Now Leo has to investigate her. 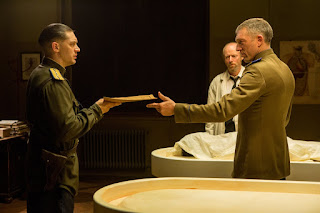 For once he takes a stand and refuses to toe the party line. For which he is demoted and the pair of them are exiled to a small Siberian town. It could have been so much worse. 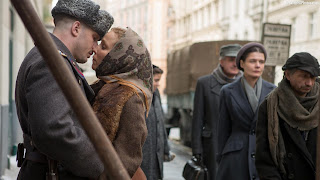 Still working for the MGB in Siberia, Leo gets involved in investigating another child murder and this time he manages to convinces his superior, General Mikhail Nesterov (Gary Oldman), that a serial killer is killing them. Together they discover that there have been a total of 43 similar murders in the region or 44, if you include Alexi’s son. 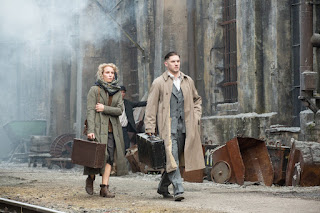 Leo and Raisa go well outside normal procedures in an effort to catch the killer and it all ends in a good punch up.

The film effectively conjures up the grim, grey and disturbing reality of Stalinist era Russia. Presumably this is why it was banned in Russia. The film highlights a system which victimized its own people while at the same time allowing many criminals to go unpunished.

The film does struggle to decide whether that is its purpose or whether the murder investigation is its purpose. The result is a slightly unsatisfying mixture of both with some dodgy accents and a good punch up or two. Nicely depressing though.

Afterwards we head for a few beers in the Brunswick and the Alexandra.