We’re back at our usual Parkrun this week at Forest Fields. L runs it, I get the bacon butties in.

The afternoon sees a spot of hedge cutting and then a drive over to Derby. L drops me at the Derby Beer Festival and joins me for a pre-race curry there. She has a race tomorrow, I don’t but I do have a Crufts Team qualifier.

Then she heads off to meet Daughter at the train station. She gives Daughter a lift over to her father’s, where she (and Son) have been summoned for his birthday party, a significant one we believe.

I loiter at the beer festival awaiting her return and have a few beers to pass the time. Sadly the festival is a shadow of its former self. With Derby’s Assembly Rooms shut, one feels more as a political statement that anything else, the festival now takes place beside it, in a tent on the Market Square itself. It is more like a refugee camp than a beer festival. Hopefully they will find it a new home for next year.

When L returns we head off to see ‘Amy’ at Quad.

‘Amy’ is a documentary about Amy Winehouse made by Asif Kapadia, the man who also made one about Ayrton Senna. To do so, he had the full cooperation of the Winehouse family and this, if nothing else, results in an amazing collection of archive footage. These clips, many clearly made only for personal viewing, are extremely revealing and at times uncomfortable to watch. Added to the footage are the recollections of many of the people who shaped her life and career.

Her father has openly disowned the film, after he saw the final cut, saying it wasn’t a good portrayal of his daughter. I would disagree totally, if anything it paints Amy Winehouse in too good a light.

It’s everyone else who gets butchered, her father included. For being a rotten influence on her from the start. From his infidelity during her youth to his conversion to dotting dad when she gains success and wealth. I can see why he didn’t like it.

Winehouse is no saint of course but it seems that hardly anybody is prepared to guide her away from bad influences. Those that try fail when they come up against the major influence that is Blake Fieldler, the inexplicable love of her life. It is his relationship with the insecure Winehouse which seems to be the deadly tipping point in this story.

This is a man who leaves his current girlfriend to be with Winehouse, then leaves Winehouse to go back to her. Then he switches women again when Winehouse gains success and wealth. Are you spotting a pattern here?

Unlike her father, this particular hanger-on led her into hard drugs. Then there’s the press, of course, who relentlessly pursued her.

The contrast between the Amy of the early years up to the time of her début album ‘Frank’ in 2003 and what comes afterwards, when she hit the big time with ‘Back to Black’ in 2006, is very pronounced. At that time, even I was enchanted by the attractive young talent but I quickly lost interest as her appearance (and life) became more bizarre and she disappeared under the weight of her tattoos.

This film however restores my original admiration. It shows how incredibly talented she was and how she made music on her own terms but what comes over most is how clever and personal her songs were. Many of her songs were of a highly personal nature with lyrics sourced from her own, often unpleasant, experiences.

Watching the film is, at times, a macabre experience. The footage of her final, ill advised, concert in Serbia in 2011 is not easy to watch. Winehouse is too drunk to be on stage let alone to sing. When she died just a month later of alcohol poisoning, aged just 27, it had a sad certain inevitability about it.
Her dreadful but popular cover of The Zutons’ ‘Valerie’, unmentioned in the film itself, accompanies the end credits. Sadly this, rather than her own stunning compositions, is what she will be remember for by many.
Whether this film tells the real truth or not it has lifted Amy Winehouse up several levels in my eyes, which can be no bad thing. 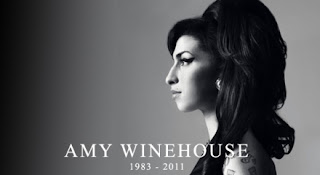