Not quite such an early start today as we head over for the Great Manchester Swim which is actually held in Salford. Although the start would have been even earlier had L managed to negotiate a Parkrun into the schedule. Not that she’s obsessed or anything.

We invite Mancunian based Daughter down to support and to eat afterwards. Although I think the gravitational pull of the duvet is going to be a huge factor in her arrival time but we’re used to that. The otehr year the Sheffield Half Marathon, with us in it, went past the end of her road while she remained totally oblivious.

I am due to be tipped into Salford Quays at 11am, L starts at 1pm, with a dog shaped baton change in between.

I’m hoping that the super clean dock water won't irritate my assorted abrasions from this week's cycling mishap too badly. I hate to think what’s in the water.

L is undecided whether to smother me in baby oil or antiseptic. I think we’ll stick with the former, baby oil is normal procedure for a wetsuit swim by the way. 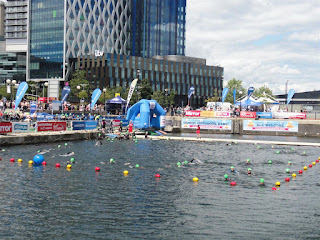 It is actually the best Great Swim I’ve done because the course isn’t just a great big loop. The route takes you around one part of the Quays then through a linking channel known as the Mariner’s Canal before emerging into a separate part of the Quays where the finish is.

L will disagree but it’s not terribly scenic as the view is mostly of the brick sides of the Quay and the feet of the person in front of you. It’s also the warmest swim I’ve done with the water temperature over 18 degrees. I was sweating into my neoprene by the time I’d finished.

Once we’ve both done our swims we head to a nearby pub, a Hungry Horse thing so not exactly fine dining. At which point Daughter appears to join us to eat. She then takes us for a coffee and a cookie at her work, Subway.

Then we head for home where we head off to the Horse and Jockey at Stapleford for a few beers.