Today is the Yorkshire Half Marathon which is actually the Sheffield Half Marathon in disguise. I wonder if there’s some politics behind this name change because it is most definitely Sheffield's race and Sheffield really deserves full billing in the name given how well it is supported by the locals. Perhaps it is an attempt to distance itself from the famous water debacle of 2014 after which the organisers and the race route all changed but half the point of these types of events is to promote the name of the city they are in.

It’s just me running today as L has decided that the combination of a heavy cold and her various injuries is too much to drag around the course. So the dogs get a reprieve from being home alone and get to join in with the supporting.

As with most of these big races, the toilets were a slight problem. There probably were enough but as they were widely scattered which meant queues snaking all over the place.

The start is right in the city centre on Arundel Gate and the finish is on Pinstone Street but from there there’s an out and back on the always well supported Eccleshall Road with a mid-race loop taking you up to the edge of the Peak District. This is the interesting bit.

Interesting in that is consists of a five and a half mile hill taking you all up to the village of Ringinglow. It was a long challenging climb that turned many grown men and women to tears. I quickly realised that it’s a good job that L had opted out of doing this with her dodgy ankle but personally I loved the new cheeky course but then I do love a bit of a hill. Note to self: I must try and take it easy given the state of my calves.

The support from the people of Sheffield was amazing and there were crowds nearly all the way along the route. Although the macabre bunch did seem to congregate most greatly on the hilly bits but they were all very vocal in cheering us up it and apparently the view from the top makes it all worthwhile. Yeah, whatever. Ask me again later.

Post-hill it’s largely flat across the moors before we start plummeting down the other side
back to Sheffield. It is here that I latch on to the 1:45 pacer, who is evidently planning a negative split given how far he is off his target pace. Clearly he’d done the hill at a steady pace and now he set off like a greyhound on steroids. I simply couldn't keep up with his downhill pace as I'm not that hot at plummeting but I (almost) managed to keep him in sight until the finish.

I often complain about not seeing the mile markers and I again struggle here. They were on the same sail banners as loads of sponsors’ logos and that’s probably why I missed half of them. There were also some showing a countdown from 10k which were very clear to see as they were twice the size of the mile markers. Wrong way round surely!

The water stations were excellent and had the entertaining addition of some large blue bins for target practice with your used bottle. They were actually so big it was difficult to miss.

I cross the line in 1:46 again, the same as in Cardiff, where I’m handed my medal and a florescent lime green monstrosity that appears to be masquerading as the race t-shirt. Not sure what am I supposed to do with that?

I am then reunited with L and the boys after waiting an inordinate time for my bag from the baggage bus. It may just have been my baggage lorry but it was utter chaos as they couldn't find loads of people's bags. This means my plan to have warm clothes ready had backfired massively but overall it was a great race.

In the evening we are at Broadway.

Generally I like biopics because it is a great way of finding out about the life of someone you probably didn't know that much about. The problem is of course that filmmakers are prone to re-writing history or in fact making the whole thing up in the name of entertainment.

'Eddie The Eagle' is very loosely based on the true story of British Ski Jumper Eddie Edwards. Personally, I think the true story of Edwards' quest would have been even more interesting but that's just me I guess.

The film starts with Edwards’ (Taron Egerton) childhood where he is casting off his leg braces to try to pursue his dream of going to the Olympics in any sport that he can. His mother (Jo Hartley) is highly supportive of his ambition but his sceptical father Terry (Keith Allen) isn't. His father wants him to instead follow in the family plastering tradition. Which in real life he does, as a necessity to finance his Olympic dream, but not here.

After exhausting all possible summer sports Edwards turns to the winter events where he has more success and in a very short time becomes a world class downhill skier. Sadly he is cut from the British team by the stuffy Olympic selector Dustin Target (Tim McInnerny) just before the 1984 Olympics. 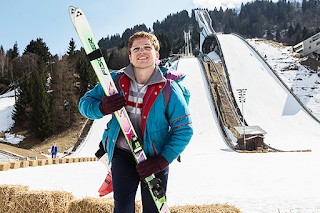 So he turned to ski jumping even though he didn't know much about it and headed off to a ski jumping hill in Garmisch-Partenkirchen, Germany. It is there that he meets one of the employees at the hill, Bronson Peary (Hugh Jackman). Peary is a former ski jumper who apparently squandered his career and now drowns himself in alcohol. Which isn't true obviously. 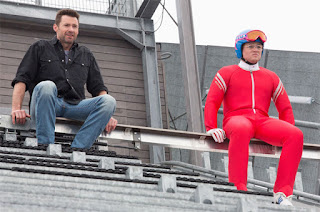 Edwards attempts to learn to jump by trial and error while Peary repeatedly tells him to quit before he kills himself. Eventually he persuades Peary to coach him and then exploits the ancient qualification rules to qualify for the 1988 Winter Games in Calgary, something no one from Britain has done since the 1920's.

Although there has been a lot of license taken with the story it is still a pretty decent film and a total crowd pleaser. It helps that the filmmakers chose a decent actor in Taron Egerton, who clearly took the time to master the mannerisms of the real Edwards. 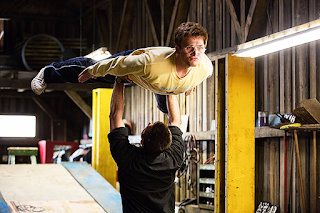 With everything being played for laughs it takes some of the gloss off what a steely determined athlete Edwards really was but not all of it. His perseverance, dedication and hard work ethic still manages to shine through. For pedants like me a documentary about his life is being planned. 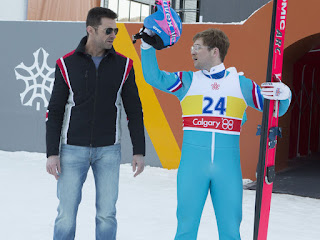 Edwards came last in Calgary but jumped a personal best of 71 metres, a mere 47 metres behind the Matti Nykanen who won gold. Of course Pierre de Coubertin, the foundering father of the modern Games said that the most important thing in the Olympic Games was ‘not to win but to take part’. Which, obviously, also isn’t true. Winning is everything.

Afterwards we pop into the newly refurbished Lord Roberts for a bit of refreshment.