The day starts very early with a 4am alarm call and a very early breakfast for the dogs who are staying a home today. Which is a very good call considering what is to come.

Once we get to Leeds things don’t start off terribly promisingly. The organisers have actively encouraged everyone to park at Roundhay Park, and we made use of the free car park yesterday, but today due to the road closures we can’t find an access route into it and there are no signs. We ask two marshals but neither have a clue as they are both from Manchester and haven’t been briefed. We do what everyone else is doing, abandon our cars in the street and walk to the start.

Next problem, the loo queues. These are long, which is normal of course but you’d think they have managed to hire more than around 20 portaloos for the 5,000 competitors. L and I queue together but she aborts when it becomes apparently it’s going to take an age and her start is 30 minutes before mine. A lot of people seem to come to the same conclusion perhaps thinking the lake itself is a better option.

In T1 the usual procedure is to set up your towel, bike shoes and socks on the ground with your helmet on the bike with your gloves, sunglasses etc. Not today. Anybody who did this would have come back from their swim to find that an official had scooped up all their neatly laid out kit and dumped it into their blue bag. This appeared to be a new rule to everybody.

Next its time to find bag number 3 (the green one), this was by the lakeside and was for you to put in any dry kit you took off which would then be whisked to the finish line for you. As I got ready for my swim I packed my green bag and initially put my phone, wallet and keys in it. Then I change my mind, removing my phone, a bit of cash and the car key, instead attaching these to my bike. What a good call this turns out to be.

Given that there were no stick on number tattoos I was expecting to get numbered up for the swim in the old school way with a marker pen but no. Seemingly the budget didn't stretch to marker pens either.

The swim is good, I manage to front crawl almost all of the 1500m even the bit that was so shallow I had to keep my arms bent at the elbow to get a stroke in. My swim time was 33:32 which I am more than pleased with. 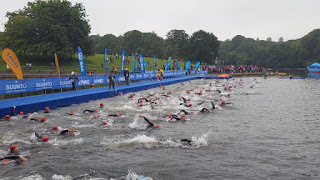 Then comes a 400m plus run uphill to T1, then the same again downhill once you’ve got your bike and deposited everything else (wetsuit, swim hat, goggles, towel etc) in your blue bag which you need to carry with you, whilst wearing bike shoes and cleats before handing it to someone just before the mount line. All very odd and another first, at least regards any triathlon I’ve done. Like your green bag, your blue bag will then be transported to the finish and will therefore be waiting for you after the race. 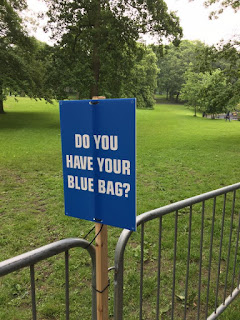 Dozens of people tried to argue with the officials before the start (me included) that not only was running 400m downhill in cleats with a bike in one hand and a heavy bag in the other dangerous but also pointless. Almost everybody was parked up a Roundhay so would then have to bike back from Leeds carrying their bags. Why not leave everyone's wetsuits here in T1, like in a normally triathlon... No, apparently that’s not allowed.

Consequently my time for T1 was an eye-watering 11:23, at least I know what I need to practice for next year e.g. running 400m uphill barefoot and running 400m downhill in cleats with a bike in one hand and a bag in the other.

After a tricky uphill bike mount we are on to what proves to be a fun and fast bike course bar the odd pothole. It’s busy though, so you needed to have your wits about you but those trying to pass you would helpfully loudly shout ‘on your right’ at you even when there was no ‘right’. So at least you knew who to stick two fingers up to. The course was basically a downhill adrenalin rush into Leeds, then a U-turn back largely uphill to Roundhay before U-turning back to descent once more into Leeds, all on closed roads. About half way through I pass L who had started before me and pause for a brief chat, although she doesn't really seem in the mood. Deep in concentration I guess.

I wheel into T2 in 01:16:45, well not really wheel as the dismount line was ridiculously early so it turned into about a 150m run. Everybody had grumbled about the awful condition of T2 yesterday. Gravel, litter, puddles, it was so bad you almost expected to see a few discarded hypodermic needles. Needless to say nobody was going to run into T2 barefoot which would have been the norm for a lot of the better triathletes.

Then on to the run which is five laps around the city centre. Now I’ll just be happy to get through this without my calves popping. I had pre-warned L that I’ll probably be waiting in the St Johns Ambulance somewhere on the run course but it doesn’t happen and I complete the course. Five laps was a bit repetitive and it did make it very congested but on the positive side it enabled you to make the most of the crowds.

I cross the line clocking a pedestrian 53:55 for the run and 02:58:56 overall. Well pleased. It’s been a brilliant course and it’s great to finish on the blue carpet just like the pros. 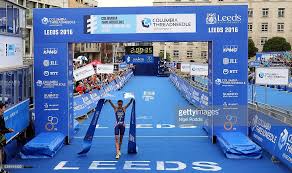 It’s also been a good event for spectators who have turned out in good numbers. That I guess is the main thing but everything else, from the lack of clarity in the original race instructions to the shambolic registration procedure yesterday had been poor and it was just about to get worse, much worse.

The next cock-up was relatively minor, with the finish chute going to the right of the course which meant that once you’d finished you had to cross over the run course to reach the post-race area whereas if it had gone left, this wouldn’t have been the case.

I skip past the first few stalls offering pre-race food as all they had on them were slices of orange and bananas cut in two. These are more during-race food and I needed something more substantial but this meagre selection turned out to be it. There were apparently some chunks of bagel but I obviously missed that in my search for the non-existent flapjacks etc. I reach the Erdinger Alkoholfrei which appeared to be at the exit of the post-race area, so I turn around and go back for another look. I have my medal (sponsored by the Poundshop I think) but I don’t have my goody bag or my finishers' t-shirt. 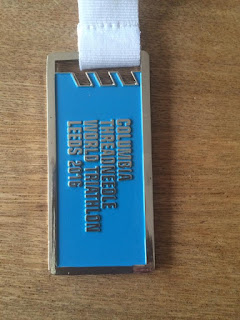 A second lap of the stalls produces the same result. No goody bag, no t-shirt. Then I see a large queue outside a little tent perhaps this is where the t-shirts are. No, this is the baggage collection tent but not only do they have no t-shirts they have no bags either. 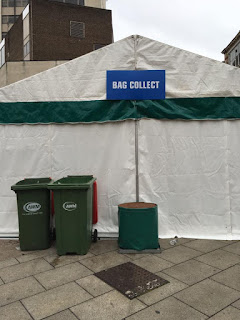 The overtly complex bag system together with too few too small vans had led to a very predictable outcome. In fact it is impossible to imagine how someone could have thought those small vans could transport 12,000 bags and even if they had, that a pint sized marquee could hand them out. It was never going to work, it didn’t and they were told it wouldn’t before the start. However I don’t think anyone predicted just how badly it would go wrong and just how lucky the organisers were it didn’t get worse. Some lucky folk got their bags back within a couple of hours, some waited far longer, nearly half had to go back to Roundhay to collect theirs because half way through the day the organisers simply gave up trying to transport any more.

Many athletes were left stranded with no warm or dry clothes, no phones, no car keys, no post-race food and no money to buy anything. Only the weather saved the organisers from an even more terrible situation, if it had been cold and wet you would have a few thousand athletes risking hypothermia. I went back to T2 to get the long sleeved top I had biked in. Luckily I had that. Eventually the first aid tent started to hand out foil blankets as there weren’t any at the finish line (obviously). I went off to pay £25 for a race t-shirt.

Sadly many who wanted to see the Elite races couldn't as they were too busy tried to round up all their gear or worse, they had bought grandstand tickets that were in their green bags that hadn’t arrived.

The stupid thing is that there was no need for the blue or green bags at all. If they'd just let people leave their wetsuit etc and any clothes they take off pre-swim at T1 and then advised competitors to put any clothes they might want post-race in their black bag with their shoes at T2. Which they could have walked to from the finish and collect themselves. Simple. No baggage transfer needed at all.

We were some of the lucky ones, due to our early start times, we got our bags back. Although then we have to cycle back to Roundhay with the contents of all three bags. There were shuttle buses but these didn’t take bikes and there was no information about how to get back to Roundhay by bike (obviously) and no signs (obviously). A marshal advised cycling up the A58(M) dual carriageway... yeah right. The police in the end told us to bike back up the race route as the open race was now over and the elite races were only using one side of the road but even then another marshal tried to stop us.

What should have been a stunning event, which had already been undermined by the lack of pre-race information, had since turned into a plastic bag relay with some triathlon in the middle. Sadly I think we were just a cash cow to fund the elite races and the whole thing may have ended in a riot if they'd been anyone in an official capacity to riot at.

Several hours later an email arrived warning of a problem with the ‘Blue and green bag collection’. You don’t say...