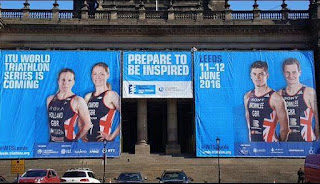 At least it’s not an early start this morning, tomorrow will be another story, so we have time to sooth a few nerves before we head up to Leeds at around 10.30.

We have a fairly uneventful drive to Leeds until we attempt to find registration to which there is no sign posting to help us out. We get nearish with help from the woman on my phone and eventually pick a car park that coincidentally turns out to be near the piece of wasteland that they are using for T2.

Unfortunately the car park we chose was a multi-story (not that we saw any that weren’t) and we stupidly forgot we had the bikes on the roof. Crash. We look behind, the dogs look behind and everyone is shocked to see the bikes behind us, on the floor, with the roof rack on top. Whoops.

We park the car, which now longer contravenes the car park's height restriction, before attempting a rescue mission. Amazingly once we take everything apart the roof rack seems amazingly unharmed and goes back on to the roof. The bikes too appear in good order. Slightly bent tri-bars on mine, twisted brake levers on L’s but both are straightened ok simply by adjusting them with an Allen key. Whether they'll both ride ok is another matter. The car has gained a few scratches though and obviously this is not the best start to what looks like being a complex day.

Oddly the 'height restriction' pole that is supposed to warn you of impending doom, and which we knocked down, is now back up pointing to the fact that somebody in a control room somewhere probably saw us and is by now probably uploading the CCTV footage to YouTube.

It’s a twenty minute or so hike to registration again following directions from the woman on my phone as there are again very few signs. Registration goes smoothly not that we get very much, just our race number, timing chip and a swim cap. There aren’t even any of those cool stick on tattoos with your race number and there are no freebie gels and energy bars that are usually given out by the sponsors.

There is also only one race number in the pack, not the usual two, which makes you wonder how people without a number belt can conform to the usual rule of having your number on your back on the bike and on your front on the run. This is already looking like its a race being run on the cheap.

Logistically it would have been more sensible to have had registration up at Roundhay Park where we now have to drive to for our practice swim which is scheduled from 2pm to 4pm. It would have been nice to have left our running shoes in T2, as we need to do, but this doesn’t open until 2pm. There is no obvious reason for this as it is on a disused car park that isn’t being used for anything else and surely could have been open from first thing this morning at the same time registration was.

We do at least find the free car park at Roundhay, again despite a complete lack of signage. Then we head down for the practice swim in Waterloo Lake, which goes well and is relatively well organised. We get to swim half of the course, 750m. First I swim, then L swims, with a dog baton change in the middle.

Then it's back to the car to get the bikes. It is only when we reach T1 to rack them that we find about more about the plastic bag relay. It’s a bit like a treasure hunt and you have to collect three differently coloured bags (blue, green and black, which are required for the transitions) from different points around Leeds.

We queue once for T1 only to find out we need our wave number which curiously hadn’t been given out at registration. So we abort queuing, find the board with the wave numbers on, and then re-join the queue. Then I get my blue bag, which I rack with my bike in wave 15 although the racking isn’t numbered, so it’s a bit of a free for all. Which is disappointing for such a big event.

That done, we head back into Leeds where this time we park at the roadside alongside T2, collect bag number two (black) and put what we need to in there, which is just trainers. This is then hung on my racking in T2 which this time is numbered even though T1 wasn’t. Confusing isn't it! It also turns out taht I'm in Wave 15 in T1 but my trainers are racked in Wave 16 in T2. Work that one out. 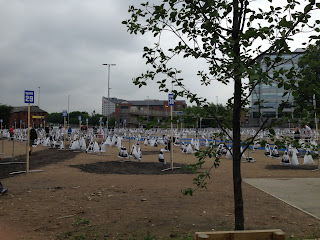 Finally we head back home after a longer that expected and overly complex day setting things up. At least the dogs have had a reasonable day out which may make up for them being left home alone tomorrow.

Posted by FitForNothing at Saturday, June 11, 2016