My calves ache this morning because I have micro tears, according to Runner’s World. That’s tears (rips) not tears (wet things). Perhaps if they get any more painful I’ll have both.

L spends the afternoon working from home, trying to keep the boys awake so that we can return to Sheffield again tonight with a clearer conscience.

It must be about time for another Feeder gig and they duly oblige with another four date preview of their new album 'Generation Freakshow' which is released today. The ‘main’ tour to promote the album isn't happening until November which seems a very odd marketing tactic and makes it all the more important to be here tonight in Sheffield.

Support comes from Manchester's Daystar, an unashamed indie rock five-piece for which you could name check almost any Manchester legend as an influence and not be far wrong. I mull over several, Stone Roses, The Smiths, Oasis before settling on The Charlatans, who aren’t actually from Manchester...

Lead singer, Simon Monaghan, certainly has a bit of Oasis or more precisely Liam Gallagher about him and a distinctive voice, relayed via a 1950’s microphone. I’m never completely convinced about his vocals during their thirty minute set, when it’s good it’s good but it seems to suit some tracks better than others. I am convinced by their lead guitarist, who is excellent and overall the whole band put in an assured performance. 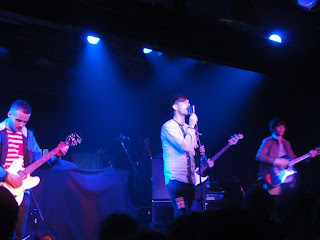 They say and do all the right things, as support bands are supposed to. I think it must be compulsory to complement the main band's soundcheck, so I’m not sure we can read much in to their prediction that we’re in for treat when Feeder hit the stage. We knew that anyway.

Grant Nicholas, Taka Hirose and co open with ‘Tiny Minds’ which before the gig I’d got in my head as being dropped to make way for the superior newbie ‘Headstrong’ but ‘Tiny Minds’ was actually excellent tonight as the set opener. Still no ‘Headstrong’ though. 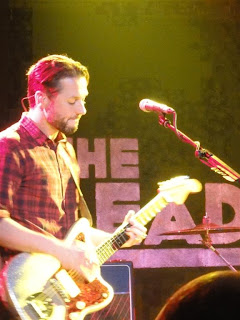 While the new album is clearly ‘lighter’ than their last, it doesn’t sound it live as ‘Oh My’ tumbles across the stage towards us.

Next up, it is a pleasure to welcome back ‘White Lines’, as this is my favourite Renegades era track and it is the first of three from that album tonight. ‘Sunrise’ meanwhile is definitely lighter and a throwback to more poppier days. 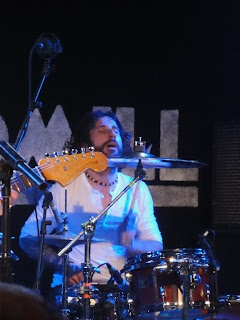 I hadn’t really noticed but the guitar intros to ‘Borders’ and ‘Buck Rogers’ are actually quite similar. Grant seems to play on this tonight, whether this is totally deliberate I’m not sure. It is ‘Borders’ that follows though. It has become quite a gig favourite and would certainly had been a big hit had it been released by the band during their prime.

‘Hey Johnny’ is the most blatant tribute to Jon Lee yet and Grant seems to put extra feeling into delivering this one. It is followed rather appropriately by the more subtle ‘Just The Way I'm Feeling’ during which, bizarrely, a fight breaks out on the floor. 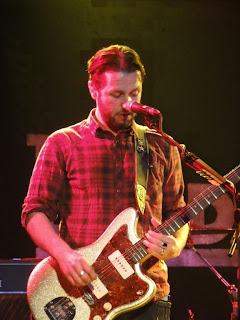 Once order is restored we get a bit of a surprise. It’s always nice to get surprises in a band’s setlist but Feeder aren’t normally big on this in theirs. ‘Down To The River’ wasn’t really what I had in mind but I certainly didn’t see its inclusion coming.

This slower moment gives me chance to look around. The demographic at a Feeder gig has changed over the last few years. The couples who saw some of their power rock ballads as ‘their song’ have been replaced by more of the ‘old guard’, grizzled Feeder veterans like me, but also a considerable dose of younger blood who seem more animated by the newer rockier stuff than the old classics. All thanks to the rock-focused exuberance of ‘Renegades' I assume.

Feeder actually seem to be on 'repeat'. If 'Renegades' was them rediscovering their 'Polythene' roots now they've pretty much recorded a similar album to its follow up 'Yesterday Went Too Soon'. No bad thing. 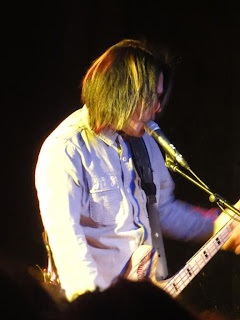 That’s only thirteen songs in the set, so that surely leaves four ‘must plays’ in the encore. The crowd await their return, now bored with incessantly chanting ‘Feeder Feeder’ they revert to locality with ‘Yorkshire Yorkshire’.

‘Children of the Sun’ is ‘must play’ because it’s to be the next single and is released next week. It opened the set back in February but tonight it opens the encore with Grant again on the acoustic. It’s a pleasant track let down by what I think is a cringeworthy title. It tries perhaps over hard to be the next Feeder anthem. Personally I don't think we need another Feeder anthem but many will disagree. 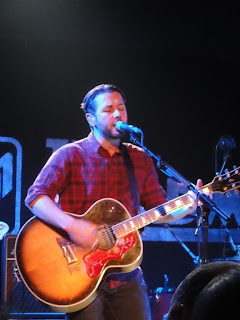 Grant then asks for requests, I don’t think I’ve ever seen him do that before. I think he was expecting a deluge of shouts for ‘Buck Rogers’ but I didn’t actually hear anyone call for it, although surely someone somewhere did. There was an impressive selection of requests offered but the loudest shouts were predictably for ‘Just A Day’ but close second was ‘Sweet 16’ but he played Buck anyway. Which naturally went down a storm but somehow I don’t think the world would have ended if he’d played something else. ‘High’, also on the ‘must play’ list, wasn’t played and the world is still spinning. Then to finish, it’s time to break a few ribs with the closing ‘Just A Day’.

Overall I really like the balance of the sets at the moment. Three tonight from Renegades, eight from Generation Freakshow and again much less reliance on the ‘old favourites’. I’m thinking Grant is getting the confidence to play simply what he wants to play rather than what he thinks he should play.

Later I blow up a photo I took of the set list but couldn’t make out clearly enough on my camera at the time. ‘Shade’ was down as an option to finish the set and an additional song was scheduled in the encore, one of the options was ‘Yesterday Went Too Soon’. If I’d got those two I’d be taking the day off work today to recover.

Unfortunately the band came on late and came up against a 10.30 curfew, so they probably ran out of time. Anybody at the other gigs this week could be in for a real nice bonus.

Afterwards we bump into some friends and adjourn to Sheffield Tap for a beer, in my case something dark, smoked and porterish from Thornbridge. Daughter joins us. We keep it brief, conscience is calling.