Not Quite Rocket Enough

I get up early and scrape the ice off the car before heading to Shrewsbury. I leave L in bed, where I understand she stays for some considerable time. Which is very studently of her and very wise.

I’m at a dog show of course and once the ice has melted off the equipment we get our first run. I’m only half joking. It’s pretty cold here.

That first run is a clear round for the Pocket Rocket but just not quite rocket enough. He comes fifth, which is promising but it could all be downhill from here. Yep. We can’t buy a clear round after that although Doggo is eighth in Veterans but MD’s fifth is the only rosette of the day.

The club are running a ring here and I’m managing it. We are given a ridiculous amount of dogs to get through and consequently I’m here from 8am until 6.30pm. A very long day. At least I get a decent lunch, including apple crumble, which is one of the compensations of ring managing. So all is not lost. The downside is being home for about 8.30. I tell L to chill the wine, the beer, the brandy, everything.

She's been painting in the bedroom whilst we’ve been out. It looks good but means the dogs, most likely Doggo, could end up stuck to the wall by the morning if they’re not careful. It might stop him scratching though; an uninterrupted sleep would be nice.

Another good day at the cycling. Victoria Pendleton has a very flaky psychological state at the best of times so when she crashed, hitting the track hard, in her sprint semi-final against her nemesis Anna Meares, you feared the worst. 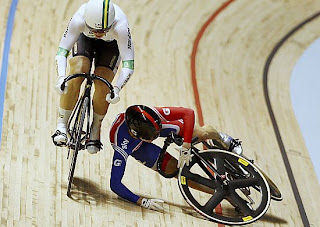 You didn’t expect Vic to pick herself up, defeat Meares and then clinch the gold as well. Superb stuff. 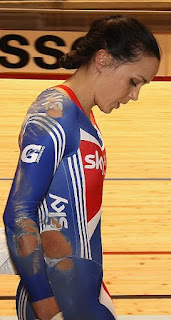