It’s all a bit of a rush job this morning as TV have, in their wisdom, moved all the final matches of the Championship season to 12.30 kicks offs when surely nobody will be watching. It makes me feel we’ve sort of been scraped under the carpet so that no one’s sees us.

That said the final weeks of this football season is a total mess. The Championship finishes today but the two divisions below do not finish until next week and the Premier League until the week after. Then the FA Final is going to be next Saturday before the Premier League ends but presumably because there’s normal League One and Two games going on it’s a 5.15 kick off. So again hardly anyone will be watching. Sprinkled randomly throughout these last few weeks will be playoff games, on any day I assume provided it’s not a weekend.

I manage a quick park session with the boys, before hurtling over to Derby for the match. At least I’m home in reasonable time and we decide to take in an early film.

L has read the book of and therefore desperately wants to see ‘Salmon Fishing In The Yemen’, I tag along, although I’m sure it’s just a RomCom in an ill-fitting disguise.

Ewan McGregor is Fred Jones, speaking for once in his native Scottish. Fred is a fisheries expert working for the government or the Environment Agency or something like that. Fred is told of an Arab sheikh who has more money than sense and wants to do that thing in the title. So I can’t complain the plot isn’t straightforward.

Once Fred has picked himself up off the floor from laughing at the prospect of taking salmon from cold rainy Scotland to the deserts of Yemen, he is told it is going to happen anyway. The government requires a feel good story to distract the gullible public from the bloodshed that is occurring in Afghanistan. Fred is sent off pronto to see the sheik’s representative, the impressively named Harriet Chetwode-Talbot (Emily Blunt). Ah ha, at this point flashing lights and sirens go off as the ill-fitting disguise is cast aside revealing the irresistible shag interest. 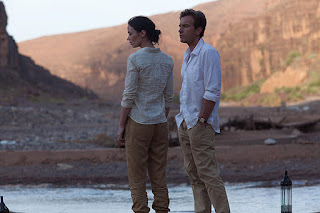 Fred is so dull though, very well acted dull by McGregor as it happens, you'd think he was into fishing, oh he is. Whereas Ms Something-Somewhat can out of nowhere summon up an impressive knowledge of Mandarin Chinese. Why is she interested? Who knows, ask the fish.

So we have two ill matched people, who are thrust together by circumstance. They will naturally start off at odds but will gradually become fond of each other, then they’ll overcome some last minute crisis before living happily ever after amongst the fish. So, the usual then. 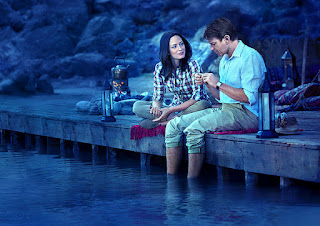 There’s a slight complication that Fred is married and Harriet has a soldier boyfriend (Tom Mison) of a mere three weeks. These though are circumstances that can easily be circumnavigated. Rest assured it's written large across the screen that Fred is not happily married and that Harriet's squeeze is going to die in action in Afghanistan.

Although he doesn't actually die, in a slight plot twist, he is the one person who not only survives an otherwise fatally unsuccessful military operation but is totally unscathed by it. The government whisk him out to Yemen immediately in a blatant PR stunt that no one seems to see through. 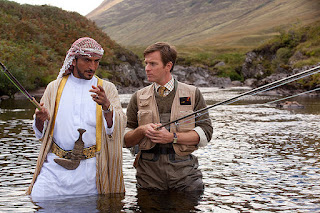 Yemen is but the backdrop, the back story of why the Yemenese people so want to sabotage this project is untold. Yet, despite the employment of top Chinese engineers from the Yangtze River dam, sabotage it they do.

That the film has its humorous moments is down to the deadpanning of McGregor but also to the excellent role of Kristin Scott Thomas who plays the Prime Minister’s pushy press officer, who chats with her boss on Instant Messenger. She gets practically all the best lines. 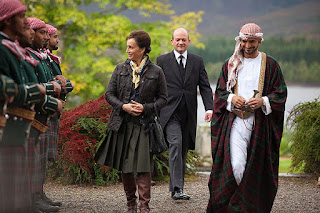 Apparently in the book practically everyone ends up dead or miserable, whereas this has a more predictable upbeat ending. Neither seems an ideal conclusion.

It’s the most undemanding film I’ve seen in some time but it’s harmless enough. A bit like fishing really.

Afterwards we retire next door to BrewDog’s new Nottingham venture, which is a pleasantly attired place. BrewDog is a craft brewer, which means they brew real ale but serve it like lager, which I think is a bit lazy. This means everything is gassy and over cold. The beers improve immensely if you give those two properties chance to wear off. It also means, as with lager, things improve markedly with strength and BrewDog have some seriously strong beers, some at 10%+. They have done real ale in the past but now they prefer to do it this way, for now, their publicity seeking approach seems to change pretty regularly. 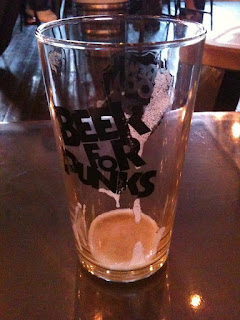 The place serves nothing but beer, which is a bold move. Forcing some people out of their comfort zone I’m sure. Pleasant place, ok beers. I’m sure we’ll return but no rush. 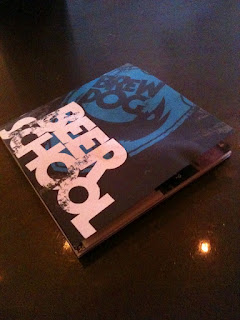 Then we try somewhere else new, the Malaysian restaurant Nada Budaya that is in the same building. We get in without booking and are pleasantly impressed with the food, only the waitress who annoyingly keeps topping our wine distracts from a pleasant experience. This is something that happened a lot in Switzerland, very annoying, particularly if you’re keeping a close check on what you drink because you’re driving, which thankfully neither of us are tonight.

We break the walk home by stopping for a night cap in the Ropewalk.