Today I can be studently with L and lounge in bed. Meanwhile our Sheffield student has to go to work, ha ha, and much to her disgust, dressed in black.

Well actually, I get up at 10am and lounge studently in front of the live cycling. Omnium Gold for Laura Trott. Medals too for Jason Kenny and Chris Hoy in the Sprint but neither of them gold. Kenny’s beating of Hoy in the semi-finals looked decisive enough to me to deny Hoy getting the Olympics gig in the sprint but then what do I know. Then it was that man Ben Swift again with a hard-earned silver in the Points race.

Eventually I take the boys on the park and then head off to the match, which is a very typical end of season style 0-0 draw. Then I head straight up to Sheffield by train. It’s only 30 minutes by train from Derby, which is a lot quicker than driving. Yet the train takes almost an hour from Nottingham.

I meet L outside Sheffield station, where she is sat with Daughter’s huge bag, full mainly of books, wrapped around the middle with packing tape. Running repairs have clearly been required. Somehow L has managed to get it from home onto the train.

We embark on a joint baggage pull and wheel it the half a mile or so to Daughter’s flat. It doesn’t quite make it, one of the wheels collapses before we get there, but we drag it against its will the rest of the way.

Daughter has, by the time we get there, crawled home from work. Not that it's far, it’s only really across the road from her. She's had the ‘day from hell’. Apparently they’ve had her scrubbing walls. Ah good, I’ve always been in favour of hard labour for teenagers. She glosses over the good bits of her day. Bar work, waitressing etc.

As she sits in front of her TV, half asleep, in her PJs. Well actually L’s PJs, clearly recently half-hinched from home. It doesn’t look like she’ll be moving anywhere any time soon. What happened to her night out on the town with us?

So we set out on our Sheffield pub crawl without her. First stop the Devonshire Cat, which is very good. Plenty of real ales, their own extensive foreign beer menu and some decent food. 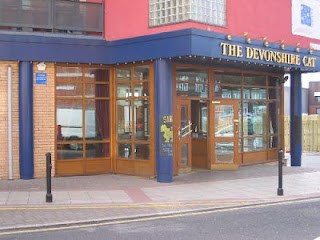 We could have stayed all night but we move on to nearby Henrys. The name didn't really inspire and despite a promising range of ale, we’re not that impressed with the place. Next, the Old House, which is a very nice place with again a good mix of British and Foreign beers. They refuse to serve L a Westmalle Belgian ale in anything but its correct glass, so we wait whilst they fetch fresh glassware from the storeroom. Nice touch. The wrong glass syndrome is something that does annoy us a lot in Nottingham.

Finally we move closer to the station to ensure we don’t miss our train home. There’s no chance of that with the Sheffield Tap being on the actual platform. It’s effectively a remote Brewery Tap for the Thornbridge Brewery. Enough said. Oddly L doesn’t have Jaipur but there are plenty of other beers of theirs (and from other breweries) to choose from.